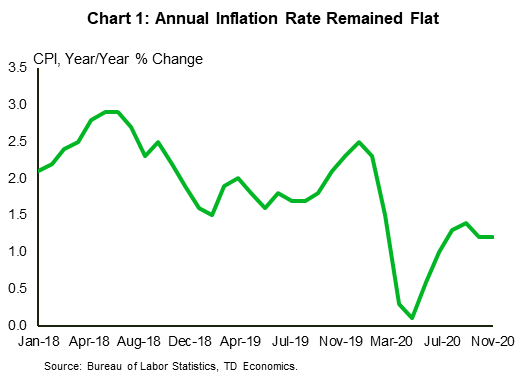 The week was a relatively quiet one on economic and financial fronts. Wall Street was chasing unicorns as share prices of home-sharing Airbnb and food-delivery DoorDash apps surged in their first days of trading. Nonetheless, the broad market edged lower this week on rising jobless claims and the sense that negotiations over a fiscal relief package have come to an impasse.

Besides the weekly release of jobless claims, the economic calendar was marked by reports on small business confidence and consumer price inflation. Optimism among small business owners pulled back by 2.6 points in November, reflecting the resurgence in COVID19 cases. The share of businesses expecting economic improvement declined, while the proportion of firms anticipating rising price pressures picked up on expectations of lower earnings and increased operating costs.

As if in corroboration of this sentiment, the consumer price index rose one tick higher than expected with a bump of 0.2% month-on-month but remained flat at 1.2% year-on-year (Chart 1). The core index, which excludes food and energy, remained unchanged from the prior month at 1.6% on a year-on-year basis. Inflation is still not a pressing concern, but it is worth paying attention to it. The economic shock also has supply-side implications – as noted by small businesses – which could show up in higher inflation even in the absence of robust economic growth.

This in turn could muddy the waters for the Fed. Today, markets expect that the policy rate will not see a hike until 2024. That’s a long time from now and if inflation does pick up, it could very well move sooner. Still, with the Federal Reserve signaling an increased willingness to tolerate inflation above its 2% it will take a convincing move to budge expectations.

In the meantime, the unexpected acceleration in weekly jobless claims shows that the economy is far from a full recovery. Initial unemployment claims jumped by 137,000 to 853,000, while claims under the Pandemic Unemployment Assistance program (supporting self-employed and contract workers), increased by 139,000 to 427,000 (Chart 2). These were the highest increases since September. Unfortunately, the upward trend is likely to persist as restrictions increase.

This proves that the pandemic continues to dictate path of economic recovery. This week, an unprecedented record of 3,088 deaths on December 9th was yet another macabre reminder of the toll of the virus. The Institute for Health Metrics and Evaluation estimates that the need for hospital resources, such as intensive care units and invasive ventilators, has surpassed mid-April’s highs and is expected increase further. Tighter hospital capacity appears likely to force local governments to increase business restrictions further.

While the vaccine offers a light at the end of the tunnel, without some additional supports the economy’s resilience will once again be tested by the virus. Here’s hoping an agreement can be reached that maintains the solid progress made to date.

Canada – Bank of Canada, Last But Not Least To The QE Party

The Bank of Canada (BoC) entered a brave new world this year. Unlike most other advanced economy central banks, it managed to enter the COVID-19 downturn without a hugely bloated balance sheet. While other central banks went on buying sprees to the tune of 20% of GDP (Federal Reserve), 40% (European Central Bank), and a whopping 100% (Bank of Japan), the Bank of Canada kept its books relatively trim at just 5% of GDP (Chart 1).

That changed this year with the onset of the pandemic. Upon dropping the overnight rate to 0.25%, it began purchasing longer-term government bonds, expanding its balance sheet by $400 billion or nearly 19% of GDP over the scope of a few months. The later entry into quantitative easing allowed the Bank of Canada to go for the gusto. While other major central banks have also been in bond buying mode, the growth of the BoC balance sheet is surpassed only by the Bank of Japan.

The central bank’s enthusiastic foray into quantitative easing has put it under increased scrutiny. There is concern that creating money (or to be more accurate “reserve balances”) out of thin air, that the Bank is risking rampant inflation. Enter Deputy Governor Paul Beaudry to explain the program and the Bank’s motivation. In a speech this week, Beaudry noted that the Bank’s intention in purchasing bonds is the same as when it lowers the overnight rate – to decrease borrowing costs for Canadians – households, businesses, and yes, governments.

Rather than money printing, the Bank’s actions are more akin to maturity transformation. It is exchanging