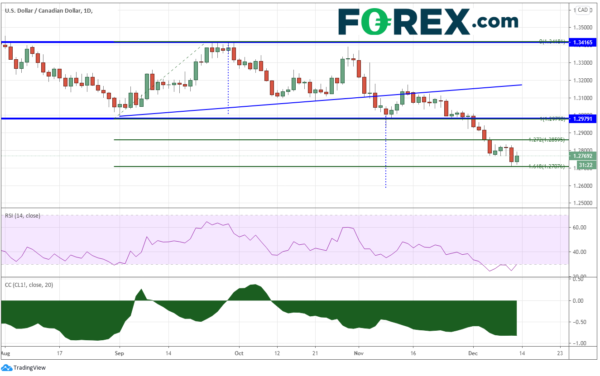 Things are not looking so hot for a Brexit trade deal.  Although the UK’s Boris Johnson and EC President Ursula von der Leyen met for dinner on Sunday night, hopes are slim that the two sides can reach an agreement by year end.  Boris Johnson has gone as far as to say that negotiations will end Sunday.  The EU has persuaded Poland and Hungary to join them in passing the seven-year EU budget, which includes 750 billion Euros in coronavirus relief.  Now it’s time for the US to pass a new stimulus bill of its own.  This week brings major central bank meetings, with the Fed, BOE, SNB, and BOJ interest rate decisions.  In addition, there will be lots of economic data to comb through as we see how much of a role the coronavirus played in the expected Q4 slowdown.

The latest in the ongoing Brexit saga brings us to Brussels, where UK PM Boris Johnson and EC President Ursula von der Leyen dined and discussed the possibilities of ending the standstill in Brexit negotiations between the UK and EU.  Conversation did not go well during dinner, and Johnson ended up flying home afterwards, without a done deal.  Boris Johnson said that he is hopeful a deal can be reached, but it is “very, very likely” there will be a no deal Brexit.  He even said he would have a three-way call between himself, Germany’s Merkel and France’s Macron, however his calls were dismissed.  For her part, Ursula von der Leyen told EU leaders there was a “higher probability for a no deal” than a deal.  Given that there is no end in sight, and that EU leaders would not have enough time to approve a deal by year end, Johnson said he will end negotiations on Sunday night.  As with many divorces, this one will have severe financial consequences, however they will mostly fall on the side of the UK as tariffs will be placed on imported goods (primarily food) and there will be significant disruptions at the border.  The UK’s GDP will take a hit.  This couldn’t have come at a worse time, as medical supplies will be held up as the country tries to end the spread of the coronavirus. The three main issues that still need to be resolved:  fishing rights, governance, and a level playing field.  GBP pairs and the FTSE could see extreme moves this week!

Although the lockdown was lifted in the UK on December 2nd, other countries and cities are still on lockdown or are headed in that direction as countries wait for vaccines to arrive.  Germany’s Merkel said that restrictions in Germany so far have not worked and made a plea to the country to not socialize before the holiday season.  She also said that more restrictions will be put in place.  In the US, California is under heavy restrictions as new daily cases surge to new highs and ICU capacity drops.  Governor Newsom has issued a regional stay-at-home order for southern California, beginning Monday.  And in New York City, Governor Cuomo said indoor dining will be halted, also beginning on Monday morning.  Pennsylvania announced on Thursday that they will be shutting down indoor dining for 3 weeks as well.  But help is on the way, as the UK has already begun distributing the Pfizer/BioNTech vaccine last week.  Other countries around the world have also passed emergency approval for the vaccine and the US is expected to follow shortly.

Until the vaccine is widely available, more stimulus is needed.  In Japan, PM Suga unveiled a 736 trillion Yen fiscal package, which includes a new furlough program, healthcare, cash, and funds for single parent families.  In Europe, the EU was finally able to pass a seven-year budget, which includes 750 billion Euros for coronavirus relief.  The US has been trying to pass a second stimulus package since the summer, however, has so far, failed to do so.  Both the Republicans and Democrats are blaming each other.   This week, the US Federal Reserve, the Bank of England and the Bank of Japan all meet to discuss monetary policy.  The US FOMC is likely to remain unchanged until they see what the federal government is willing to provide.  The BOE has discussed using negative rates in the past as a policy tool to provide more stimulus, but with the uncertainty surrounding Brexit into year end, they are also unlikely to act.  The BOJ is likely to extend current stimulus beyond March at its meeting this week.

In addition to the central bank meetings this week, there is a plethora of economic data that WILL MATTER as the markets begin to digest just how hard the world economy has been hit by the recent surge of the coronavirus.  PMI manufacturing data will be the first important December manufacturing data released.  We will also get a look at the UK Claimant Count Change, US Re