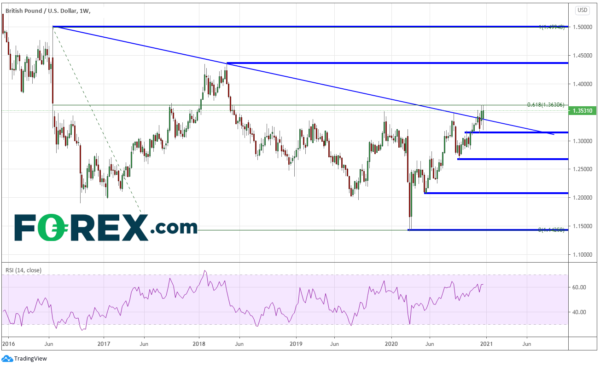 Finally!! On Thursday, Brexit negotiators were able to put the finishing touches on the trade agreement that would allow the UK to leave the EU without tariffs on goods originating in the UK or the EU!  The deal will be implemented before January 1st; however, it still needs to be approved by both sides.  In addition,  the US Democrat controlled Senate and the Republican controlled House of Representatives have reached a compromise on a stimulus package worth nearly $900 billion.  However, President Trump has threatened to veto the deal, as it only provides $600 per person in coronavirus aid.  President Trump now want $2,000 in direct payments.  As we approached year end on Thursday, watch for continued posturing on the Brexit deal and the US Stimulus package during what is expected to be a light volume week in the markets.

On Christmas Eve, UK and Brexit negotiators gave everyone an early Christmas present with a Brexit  trade deal which will allow many people to relax a bit and enjoy the holidays this week.  The main issue of access to fishing waters surrounding the UK, has been resolved, and therefore, allowed to the deal to proceed.  The UK will allow a  5 ½ year transition period to incorporate new rules and laws on how much fish the EU can catch.  Afterwards, the fishing laws will be reviewed annually.  However, Brexit isn’t over yet.  Because the deal was reached so close to December 31st,  it does not give both sides time to tear through the language and formally approve the deal (particularly on the EU side).  Therefore, the deal will begin to be implemented though provisional application and will be formally voted on after January 1st.  Watch for possible bickering over wording of the agreement this week.

In the US, Congress has approved the long awaited second Covid-19 stimulus package.  The package allows for an extra $300 a week in continued unemployment benefits.  These benefits are currently set to expire on December 26th. In addition, the plan allows for $600 per person in direct aid.  However, President Trump has threatened to veto the plan as he wants $2000 per person in direct aid.  President Trump said funds designated for foreign countries, lobbyists, and special interests in the plan should be given to struggling American people.  On Thursday, Congress failed to pass an amended package.  The original bill now is waiting for Donald Trump’s signature.  If he vetoes the bill, the current $300 in extra unemployment aid (from the original CARES act) will end.  There will be plenty of political posturing into year-end as the package will continue to be debated this week between Congress and President Trump.

As the coronavirus continues to rage around the world, lockdown and restrictions continue.  Many countries have placed restrictions on travel and gathering over this holiday period.  The world will be patiently watching over the next few weeks to see how much the virus has spread over the holidays.  However, help is on the way!  Vaccines continue to be distributed and are currently being given to frontline workers and the elderly.  It will take time to deliver enough vaccines to everyone, with many experts saying it won’t be widely available until March or April.

With Brexit and US Stimulus resolved (sort of),  central banks now have a baseline as to how much federal governments will be willing to help with federal aid.  Many central banks don’t meet again until at least mid-January, with the BOE not meeting again until early February.  However, recall that central banks acted between meetings when the pandemic first began.  Now that they know where governments stand, they can act between meetings if economic data begins to come in much weaker than expected.  Monitor comments from bank officials to see if they hint at the possibility of more stimulus.  In particular, BOE officials have been hinting at negative rates again!

The economic calendar is extremely light this week as many releases were pushed forward to before Christmas.  However, a few economic highlights are as follows: