Currency Pair of the Week: USD/CAD 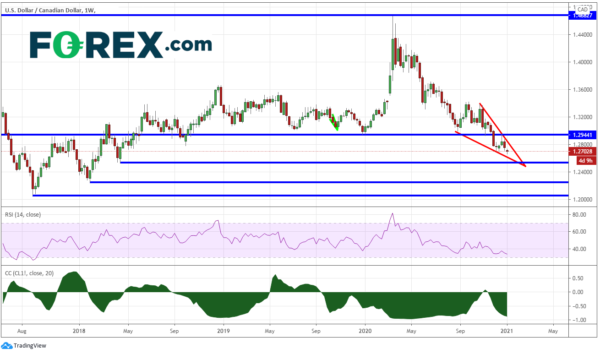 The US Dollar has been in a freefall since the coronavirus pandemic began in March 2020.  Two rounds of fiscal stimulus and an abundance of monetary stimulus have kept the printing machines rolling as the new supply is suppressing the value of the US Dollar.  On January 5th, as discussed in the Week Ahead, there will be elections in the US state of Georgia for 2 Senate seats.  Currently, Republicans hold a 2-seat majority in the Senate.  If both are won by the Democrat candidates, the Senate will be split 50/50.  If any bills voted on by the Senate result is a 50/50 tie, the final vote will be cast by Vice President Kamala Harris.  Therefore, Democrats would control the Senate.  They already have a majority in the House of Representatives.  Having both the House and the Senate would allow Democratic President-elect Joe Biden to have a much easily time passing his agenda, including a fresh round of stimulus.  Watch the election results on Tuesday evening.  If both seats are won by the Democratic candidates, this could push the US Dollar lower.  In addition, on Friday the US will release Non-Farm payroll data for December.  Expectations are for an increase of only 100,000 jobs, the lowest since the pandemic began. This release may also keep the US Dollar suppressed (lower jobs equal more stimulus).

The Canadian Dollar, on the other hand, has been extremely strong since the beginning of the pandemic.  Although Canada has gone through its own fiscal and monetary stimulus measures, PM Justin Trudeau has done a much better job than its US counterpart at controlling the coronavirus, including lockdown measures over the end of year holidays in Ontario and Quebec.  As such, the BOC will be in a better position to reduce extraordinary monetary stimulus than will the US Fed.  This is helping to add strength to the Canadian Dollar.  Given that Canada is a crude exporting country,  the Canadian Dollar is also highly correlated to the value of Crude Oil. WTI crude has been moving higher since its lows on April 20th, and the Canadian Dollar is following right along with it.  Canada will also be releasing its jobs data on Friday.  Expectations are for a decrease of 25,000 jobs in December.   The actual difference in job numbers between the US and Canada on Friday could also affect the value of USD/CAD.

As previously mentioned, on a weekly timeframe USD/CAD has been moving lower since the March pandemic high near 1.4667.  The pair is currently trading near its post-pandemic lows near 1.2700 and is forming a descending wedge.  If price breaks higher out of the wedge, the target is a 100% retracement of the wedge, which is near 1.3390.  In addition, also as previously mentioned,  the Canadian Dollar and Crude Oil are highly correlated, therefore USD/CAD are highly inversely correlated.   The correlation coefficient is currently -.87. For reference, a correlation coefficient of -1.00 means that the 2 assets are perfectly inversely correlated and would move in opposite directions on a one to one basis.  Therefore, traders should also be watching crude oil for clues to direction in USD/CAD. USD/CAD can be in for some volatility this week, depending on the outcome of the elections in Georgia and the payroll reports from both the US and Canada.  In addition, Crude Oil may play a factor in determining the direction of USD/CAD over the longer-term.