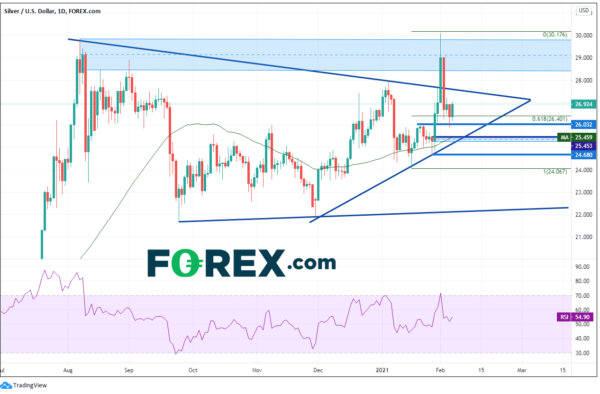 Markets were back to their old selves last week, as the short squeeze drama surrounding GME subsided. Joe Biden seems to be off to a good start as US President,  as his $1.9 trillion stimulus proposal makes its way through Congress. US Non-Farm Payrolls were in line with expectations, however revisions to December’s number were extremely poor.  Canadian employment data was weak as well. Central Banks were mixed last week, as the BOE told banks to prepare for negative rates but prefaced it by noting they “don’t mean to imply negative rates” and the RBA increased their bond buying program by A$100 billion.  As markets are keen to inflation data, all eyes will be on inflation rates from China, Germany, and the US this week.  On Friday, we’ll get a first look at the UK’s Q4 GDP as well.

The only short squeeze attempt last week was on Monday in Silver.  The Silver ETF, cash market, futures contract and physical market all moved higher on Monday in the attempt.  However, as market message boards soon realized, attempting to short squeeze a commodity with various derivatives in other markets, is much harder to do that squeeze a single stock.  Silver markets were up 4.87% on Monday, only to close down 8% on Tuesday.  GME fell back to earth, as price closed down nearly 80% on the week!

The $1.9 billion stimulus proposal that Joe Biden put forward is making its way through Congress. On Friday morning, the Senate voted on a budget proposal which allows committees to start drafting legislation.  The vote was split down party line 50-50, as Vice-President Kamala Harris casted the deciding vote.  The bill passed the in the House of Representatives on Friday 219-209, as once again, votes were split down party lines.  The hope is that the package will be ready by the end of the month.

Although employment data was on the weaker side of expectations for both the US and Canada, the focus for economic data has been on increasing inflation expectations.  Even with many major central banks around the world indicating they will not remove QE or raise rates any time soon, possibly for years, inflation expectations have been creeping up.  This week will bring inflation rates from China, Germany, and the US.  Both the US Dollar and 10-year yields reached new recent Year to Date highs this week (however the US Dollar fell on Friday as it becomes more evident the large stimulus bill will be passed).  Trade have been looking ahead, post lockdowns for inflation signs.  However, some central bank speakers have expressed concerns that a rise in inflation may only be temporary as a pullback in “good” data may occur in the near-term.   Traders will be watching and dissecting the inflation data carefully this week to see if expectations have fed through to the real economy.

Earnings data will begin to slow this week.  With many of the big tech names already reporting, there are only a few notable names for this week.  They are as follows:  CSCO, OCDO, TUI, LYFT, AMAT, GM, AZN, UBER, DIS

The second week of the month usually brings with it a light data, and this month is no exception. The big day will be on Wednesday with a trio of countries reporting inflation.  Also, on Wednesday, 4 heads of central banks and the head of the German Bundesbank will be speaking throughout the day.  In addition, on Friday the UK will report its first look at Q4 GDP. Other important economic data is as follows: As mentioned above, Silver was the subject of an attempted short squeeze last week.  Price had been moving in a symmetrical triangle since prior highs in August 2020.  Since November 30th 2020, price had been moving higher within the triangle.  However, as rumors accelerated that SLV may be the next target of a short squeeze on January 28th, price accelerated higher.  On Monday last week, price busted out of the top of the triangle and moved from 27.00 up to 30.08, briefly taking out the August 67h, 2020 highs near 29.85.  However, on Tuesday, XAG/USD gave back all its prior day gains and halted near horizontal support at the 61.8% Fibonacci retracement from the January 18th lows to the February 1st highs.  If inflation expectations continue to increase, one could expect that silver, and precious metals in general, could continue higher.  Resistance is now at last Monday’s lows near 27.00 and then the top downward sloping trendline of the triangle near 27.50.   Horizontal support is near 25.90, then a confluence of support near the 50 Day Moving Average, the upward sloping trendline, and horizontal support between 25.25 and 25.50.  Look for bulls to enter in this area.

Notice there wasn’t much to speak of in terms of vaccine rollouts, and that’s a good thing.  The rollouts are continuing and seemingly, countries have found the bottlenecks and got the vaccines moving again.  The word variant was also not thrown around so loosely this week!