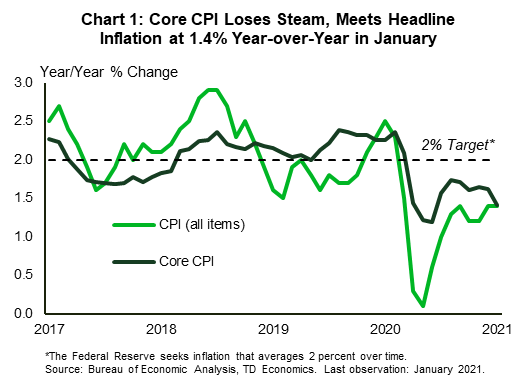 U.S. – Moving In The Right Direction

The second week of February was fairly light on the data front, with the Consumer Price Index (CPI) and the National Federation of Independent Business’s (NFIB) small business optimism index the two main releases. The headline CPI rose 0.3% in January and was up 1.4% year-on-year in the month, unchanged from December. Removing, food and energy, core prices were flat on the month and lost steam on a year-on-year basis, falling to 1.4% from 1.6% in December (Chart 1).

Given the scope of fiscal and monetary policy supports to-date and the large fiscal package currently in the works, a lively debate is taking place in economic circles regarding the potential for inflation to accelerate beyond desirable levels. As we discuss in a recent report, a pickup in inflation is highly likely as economic restrictions are lifted. But, given where inflation stands today, there is some room for it to run before it reaches a concerning pace. Supporting the narrative of higher inflation is the fact that many small businesses plan to raise prices. According to NFIB data, the share of firms planning to do so rose by 6 points to 28% in January – among the highest levels in the post-Great Recession period.

Speaking of small businesses, the headline NFIB confidence measure ticked down modestly for the third consecutive month in January. Pullbacks in the expectations subcomponents were the biggest drags on the headline measure. But, in what can be viewed as a sign of underlying resilience, the employment metrics remained broadly positive. Hiring plans held steady in January, while job openings and the share of firms raising and planning to raise worker compensation ticked up.

Signals from other labor market indicators were more mixed. Continuing jobless claims from regular state programs edged lower at the end of January, but, with an increase in pandemic-related programs, the total number swelled to just over 20 million. On a more positive note, data on initial jobless claims showed the latter falling by 19k to 793k last week – the lowest level in five weeks.

While the U.S. labor market struggles to dig itself out of the winter slowdown, there appears to be a light at the end of the tunnel. New COVID-19 cases continued to trend down this week, falling below 100k per day recently for the first time this year. At the same time, the pace of vaccinations is accelerating, with daily jabs averaging 1.6 million in recent days (Chart 2). The vaccine rollout should continue to gather speed (see report released today), hastening the end of the pandemic.

With health metrics continuing to move in the right direction, a loosening of restrictions and stronger consumer confidence should follow. Coupled with another likely jolt of fiscal stimulus, this bodes for the U.S. economy to expand at a solid clip this year. If the full $1.9 trillion American Rescue Plan package is passed, real GDP growth could run as high as 6% through 2021, enough to bring the level of GDP back to its pre-crisis trend by the end of the year. New COVID-19 variants are the main downside risk to this positive outlook. For now, their spread remains low, but it is increasing in several key states. This is something that we’ll be keeping a close eye on.

North American equity markets had another solid week, with both the S&P 500 and S&P TSX closing the week higher. Coming on the heels of last week’s gain, crude oil prices also continued to rally, stoked by vaccine optimism and expectations that faster growth in the second half of this year would accelerate the drawdown of inventories. The benchmark WTI price surpassed US$59 a barrel – a level last seen just prior to the onset of the global pandemic more than a year ago (Chart 1).

Recovery in oil prices is certainly good news for Canada’s energy sector. However, Canada’s economic fortunes continue to hinge on virus containment and the vaccination campaign. There was some reassuring news on both of these fronts this week. First and foremost, the number of COVID-19 cases have declined significantly since the start of the year. As a result, an increasing number of provinces have announced gradual re-opening plans. This week, Ontario joined other provinces in lifting restrictions, with non-essential businesses allowed to reopen with reduced capacity. Toronto and other hotspots will need to wait for another two weeks before schools and businesses will be allowed to re-open.

The recent easing of the restrictions will be welcomed by businesses, but widespread vaccinations is the only cure to this stop-and-go economy, particularly amid the spread of more contagious variants of the virus. On this front, Pfizer-BioNTech vaccine deliveries are expected to ramp up significantly starting next week. With retooling of the Pfizer plant which slowed earlier deliveries, now complete, it appears that the company will be able to deliver the contracted four million doses by the end of March. If vaccine rollout continues to pick up in the coming months as communicated by the government, we estimate it will still take until the end of 2021 for Canada to achieve herd immunity (Chart 2).

Concerns about hospital capacity have been a key trigger for Canadian provinces to tighten restrictions. International experiences indicate that hospitalizations can be more quickly reduced by focusing vaccinations on the elderly and other at-risk populations. As we discuss in a report published this week, the experiences of Israel and the UK, which have been leading the way in vaccination efforts, provide valuable lessons for Canada. Both countries have seen declining rates of hospitalizations. In Israel, where 80% of elderly have received both dozes of the Pfizer vaccine, hospitalizations have declined by 31%.

While restrictions are easing and the vaccination campaign is expected to ramp up in the coming weeks, we will have to wait a bit longer before this begins to show up in the economic data. Next week’s retail sales report will likely show a pullback in retail spending in both December and January. However, with stores and shoppers becoming more accustomed to curb-side pick-ups and online purchases, the drag will be nowhere near as large as during the first lockdown. Meanwhile, January’s data on home sales is expected to show another strong monthly performance amid low mortgage rates, elevated savings and changing consumer preferences for larger, more spacious living (and working) arrangements.

Retail sales probably rebounded in January after falling by 2.1% in the previous three months. (The control series fell 3.3%.) The strength can be explained in part by an exaggerated boost from seasonal factors after less seasonal strength than usual at year-end, but a fresh round of individuals’ stimulus payments and an easing of COVID restrictions (particularly for restaurants) likely contributed as well.

Manufacturing sales are forecast to rise by 0.8% in December, reversing the prior month’s decline to leave shipments at their highest level since February and just 3.0% below pre-COVID levels. However, with factory prices posting their largest increase in three years (+1.5% m/m, 0.9% ex. energy), the data will look much softer in real terms. Transportation products should lead the advance on a rebound in aerospace shipments and partial recovery in motor vehicles, while petroleum and forestry products contribute another source of strength to the nominal print.

TD looks for headline CPI to firm from 0.7% to 0.9% y/y in January with prices up 0.4% on the month. However, new basket weights will provide a wildcard element to this report. Under normal circumstances, updated basket weights would reflect the results of the 2019 Household Expenditure Survey but with the seismic disruption to household spending patterns from COVID-19, other countries have adjusted their process.

Assuming StatCan follows the standard practice for basket weights, gasoline and other energy products will contribute roughly half of the monthly increase on higher prices at the pump, which will also dampen the drag on a year-ago basis (-0.3pp in Dec). Food prices will provide another source of strength, helped by higher crop prices and seasonal factors. Elsewhere, we should see a more modest contribution from the shelter component on a moderation in new home prices offset by further weakness in mortgage interest costs. Airfares and travel services will also weigh on the headline print, but with a 14% m/m decline (for airfares) last January we are likely to see some improvement on a year-ago basis. Core inflation measures should hold relatively stable although we see some downside risk to the CPI-median which if realized would pull the average lower to 1.5% y/y (after rounding).

The retail sector will end 2020 on a downbeat note with retail sales forecast to fall by 1.0% m/m on a pullback in the ex-autos measure. Motor vehicle sales were unchanged from year-ago levels in December which should translate into a modest SA increase and provide a source of strength. However, new COVID restrictions on non-essential retailers has contributed to a sharp drop in foot traffic (mobility), and sluggish holiday spending in the US also points to giveback in the ex-autos measure after the surprising 2.1% increase last month, despite a tailwind from higher gasoline prices. Real retail sales should print slightly below the nominal headline which will exert a drag on industry-level GDP growth for December.