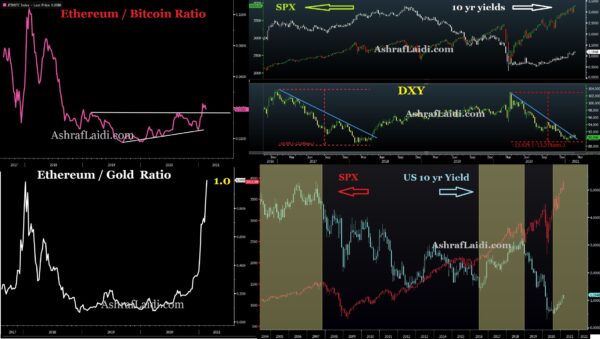 Meme stocks continue to make waves but economic data and central banks are afterthoughts at the moment. As the market continues to look past the virus, few themes have emerged. Inflation and US stimulus are commonly-cited ones but we go on the hunt for other candidates. Below are a few intermarket charts from Ashraf, telling the clear story in favour of Ethereum as it breaks the 1oz gold mark, while equity indices and bond yields may start moving in tandem again as inflation picks up.

The financial crisis started in the US and the pandemic in Asia but it will be Europe that suffers the most from both. Before the pandemic, Italian GDP still hadn’t recovered to 2007 levels. A moment of reckoning is coming for a region that’s failing to deliver far more bureaucracy than prosperity. The euro has been a wonderful solution to 20th century problems, but is failing in the 21st century.

On Thursday the EU urged the US to rejoin the WTO and align foreign policy goals to form a united front against China. The pandemic has accelerated the relative rise of China and there’s still no coherent strategy to counter it. In the leaked EU documents, they say the rise of China’s state-capitalist model “poses increasing challenges for the established global economic governance system.” Biden and Xi also held a two-hour phone call on Wednesday and we don’t yet know how they will approach the relationship.

3) The Velocity of Money

We’ve touched on this before in relation to the high savings rate. Coming out of the financial crisis QE led to a jump in M2 but cautious lending and Tea Party politics acted as a counterweight. Financial markets and housing now might be early indications that this time the money will move; with inflation to follow.

In any other year, the massive rally in virtually every commodity would be the top story in markets. Oil has had its best start to a year since 1990 while industrial metals began to soar last year and are at extreme levels. Shortages are everywhere and the reverberations through the global supply chain and the allocation of capital threaten to upend economic assumptions about the recovery.