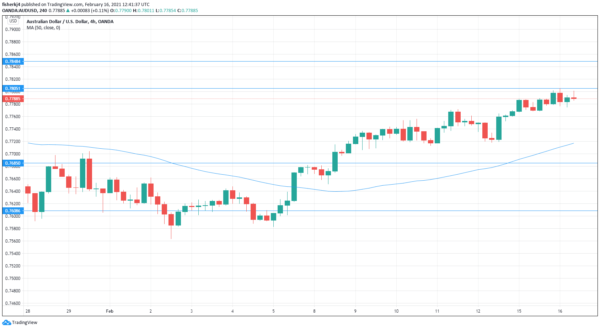 The Australian dollar has posted slight gains on Monday, continuing the trend we saw at the end of the last week. Currently, AUD/USD is trading at 0.7777, up 0.20% on the day.

There were no surprises from the RBA minutes, and the response from the Australian dollar has been muted. At the RBA’s policy meeting earlier in February, bank members decided to extend the QE program for an additional six months, until October 2021. The minutes indicated that the central bank expects that “very significant monetary support would be required for some time, as it would be some years before the bank’s goals for inflation and unemployment were achieved”. For anyone who has painful memories trying to decipher Fedspeak when Allan Greenspan was chair at the Federal Reserve, the RBA’s message was pleasantly crystal clear – QE isn’t going away anytime soon. The RBA added that QE had “helped to lower interest rates and had contributed to a lower exchange rate than otherwise”, reiterating that one of the aims of the bond-buying programme was to put a lid on the exchange rate, as the Aussie remains close to 3-year highs against the US dollar.

The decidedly dovish stance of the RBA is noteworthy, in that it comes at a time when the Australian economy is showing a V-shaped recovery, well on its way to reaching pre-Covid growth levels. Still, as most major central banks have extended their QE schemes, the RBA needs to stay in line, in order to keep the Australian dollar at bay and protect the export sector. The minutes took specific note of this, stating that “a number of central banks in other advanced economies had announced extensions of their bond purchase programs to at least the end of 2021″.