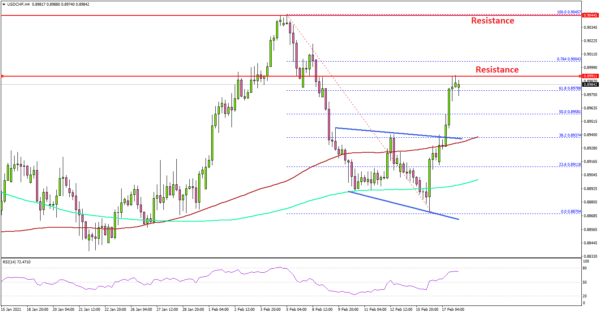 After a strong decline, the US Dollar found support near 0.8870 against the Swiss Franc. USD/CHF surpassed the 0.8920 resistance, but it could face hurdles near 0.9000.

Looking at the 4-hours chart, the pair traded as low as 0.8871 and climbed back above 0.8940. There was also a break above a contracting triangle with resistance near 0.8935.

Fundamentally, the US Retail Sales figure was released by the US Census Bureau. The market was looking for a 1% increase in sales compared with the previous month.

The actual result was better than the forecast, as the US Retail Sales grew 5.3%. Besides, the last reading was revised down from -0.7% to -1%.

Overall, USD/CHF might climb further, but it could struggle to clear the 0.9000 resistance. Conversely, EUR/USD declined below the 1.2100 support after it failed to surpass 1.2150.