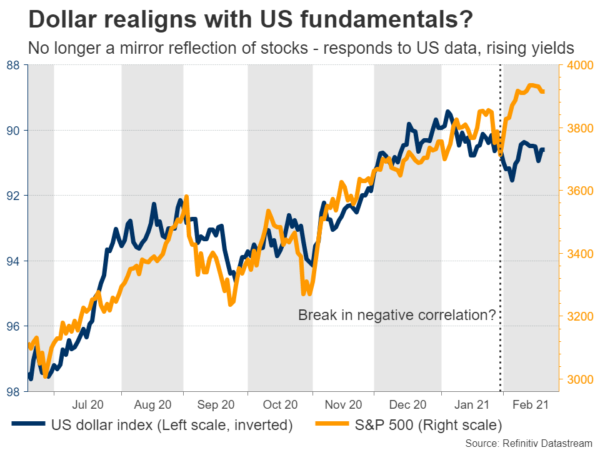 There’s been a striking change in the dynamics of the FX market lately, with the US dollar no longer trading exclusively as a safe haven and instead reacting to American economic data. Investors have their eyes on the Fed, even if it is too early to price in a proper QE withdrawal. The main event in the coming week is the RBNZ meeting, where the central bank could strike a more cheerful tone. Fed Chairman Powell also testifies before Congress.

Is the dollar becoming the US currency again?

It was a fairly quiet week in terms of news. The main story was the relentless march higher in US bond yields, which briefly breathed some life back into the dollar. A mega spending package from Congress that boosts inflation and ultimately leads the Fed to scale back its asset purchases appears to have been the driving force behind this repricing.

What flew under the radar, was the dollar becoming more aligned with US fundamentals. After the crisis hit, the greenback transformed into a safe-haven, essentially becoming a mirror reflection of stock markets. This dynamic seems to be changing. The dollar fell last week when US inflation data disappointed, and it surged this week after retail sales overcame forecasts.

Indeed, the short-term correlation with the S&P 500 has turned positive, after being deeply negative for most of last year. It appears that with the Fed back in play, US economic performance matters once again.

If the FX market goes back to trading economic fundamentals, better days may lie ahead for the dollar, at least against the euro. The American economy is already stronger than the Eurozone’s, and there is an overload of federal spending coming to ensure this divergence grows further. Add on top the faster pace of US vaccinations, and it’s a recipe that argues for a lower euro/dollar.

Arguing in the same direction is the stock market itself. There’s a real mania going on in equities, but the rally has lost momentum lately. Specifically, both good and bad news has been negative for stocks this past week. The market tumbled after US retail sales beat expectations, as the good news implied a faster withdrawal of Fed support, and it tumbled again after jobless claims disappointed, on fears the labor market is not mending quickly enough.

This feels like a correction waiting to happen. To be clear, the longer-term path for stocks is probably higher thanks to the cannon barrage of stimulus. Even if this is a bubble, we may be far from its end and it could get much crazier before the day of reckoning arrives. That said, with yields rising too, the risk of a further pullback seems elevated here.

RBNZ could strike an optimistic tone

The main event will be the Reserve Bank of New Zealand (RBNZ) meeting on Wednesday. No policy changes are expected, but considering how well things have been going lately, a more cheerful tone seems warranted. That said, policymakers will be careful not to sound too optimistic, as that could lead to an unwelcome surge in the exchange rate.

The bad news first. New Zealand is not virus-free anymore. New covid cases were discovered recently, leading to a brief lockdown in Auckland. Fortunately, this lockdown has already been lifted. The tourism industry is also struggling as borders remain closed.

Now the good news. The economy has made a stunning recovery from the pandemic. Growth and inflation are far higher than what the RBNZ projected in its latest forecasts, inflation expectations are moving higher, the housing market is booming, unemployment has been better than expected, and commodity prices have risen sharply. Vaccinations will also begin imminently.

Even though policymakers will stress that the risks remain to the downside, it is difficult not to acknowledge all this progress. Interest rate and economic forecasts will likely be revised higher. As for the kiwi, the overall picture seems clearly positive, even if the RBNZ tries to ‘talk down’ the currency.

Durable goods and Powell testimonies on the US radar

In the States, there are several data releases coming up. Durable goods orders for January will hit the markets on Thursday, alongside the second estimate of GDP for Q4. Personal consumption and income numbers, as well as the core PCE price index for January, are all out on Friday.

But the highlight will be the semi-annual testimony by Fed Chairman Powell before Congress. He will appear before the Senate on Tuesday, and then before the House of Representatives on Wednesday. Considering the stimulus package being prepared right now, he might be grilled on whether such tremendous spending is necessary.

Beyond that, markets will look for any hints on whether a withdrawal of QE purchases is on the horizon, but are unlikely to find any. Powell has been adamant that it’s too early to be having this conversation. If anything, he will reaffirm the need for accommodative policy and encourage Congress to ‘go big’ on the spending package.

This would be old news for markets. The risk is that Powell lets something slip about Fed normalization down the road if the economy is strong, which is over-interpreted by investors and triggers a brief round of risk aversion.

British, Australian, and Japanese data on the agenda too

Over in the UK, employment data for December are due out Tuesday. The economy is still in dire straits, but the incredible pace of vaccinations has convinced investors that better days lie ahead. The pound has shown a remarkable ability to absorb dismal data without even a scratch lately, so even a disappointment is unlikely to inflict much damage.

The currency’s fortunes hang on the pace of immunizations, and to a lesser degree, on global risk sentiment. The UK’s twin deficit addiction has made the pound very sensitive to the global mood, with Cable in particular having a powerful correlation with stock markets.

Meanwhile, Australia will see the release of wage and capex data for Q4, on Wednesday and Thursday respectively. Those could set the tone ahead of the next RBA meeting in early March.

Finally, there’s a data dump coming from Japan on Friday, including the Tokyo CPIs for February and retail sales for January. That said, the yen doesn’t react to data releases. Instead, the most crucial element will be whether the surge in global yields continues. Since the BoJ keeps a ceiling on Japanese yields, the yen suffers when global yields rise, as interest rate differentials widen against it.