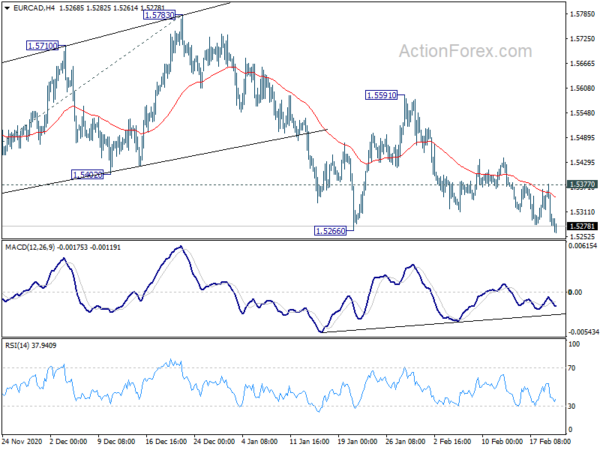 New Zealand Dollar opens the week higher after ratings upgrade by S&P. The Kiwi would now look into RBNZ’s comments on the economy and new economic projections featured later in that week. Elsewhere, overall risk-on sentiments continue to support commodity currencies and Sterling. On the other hand, Yen and Swiss Franc are trading generally lower, followed by Dollar and Euro.

Fitch Ratings affirmed Australia’s Long-Term Foreign-Currency Issuer Default Rating at “AAA” with a negative outlook. The rating reflects the country’s “strong institutions and effective policy framework, which supported nearly three decades of economic growth prior to the coronavirus pandemic and helped limit the severity of the current shock”

But the negative outlook reflects “uncertainty around the medium-term debt trajectory following the significant rise in public debt/GDP caused by the response to the pandemic.”

Fitch estimated that GDP contracted by -2.8% in 2020, versus “AAA” median of -3.8%. Economy is forecast to growth 3.8% in 2021 and 2.7% in 2022. It expects closure of international borders to persist until late-2021, which “dampened inward migration”. Trade tension with China “have not had a significant macroeconomic effect”, but remains a medium term risk.

S&P raised New Zealand’s foreign and local currency government debt rating by a notch to AA+ and AAA, up from AA and AA+ respectively. The ratings are back to a level last seen in 2009. A “stable” outlook was attached to the new ratings.

“New Zealand is recovering quicker than most advanced economies after the Covid-19 pandemic and subsequent government lockdown delivered a severe economic and fiscal shock to the country,” S&P said. “While downside risks persist, such as another outbreak, we expect New Zealand’s fiscal indicators to recover during the next few years.”

“This provides us with better clarity over the extent of the pandemic’s damage to the government’s balance sheet,” it said in a statement,” it said, “We now believe that the government’s credit metrics can withstand potential damage from negative shocks to the economy,  including a possible weakening of the real estate market”.

So we’d pay close attention to the momentum of next move. But in any case, outlook will stay bullish as long as 0.7156 support holds, even in case of deep retreat.

RBNZ and Fed Powell in focus for the week

RBNZ is widely expected to keep monetary policy unchanged this week. OCR will be held at 0.25%, while the LSAP program will be kept at NZD 100B. After some encouraging economic data, RBNZ could sound more upbeat in the statement, as well as economic projections. Negative rate is more likely ruled out for not. Nevertheless, the central might also want to refrain from saying anything that boost Kiwi’s exchange rate. The question is on how RBNZ would strike that balance.

Fed Chair Jerome Powell’s testimony will be another major focuses. Markets would look for his reaffirmation that it’s not time to even talk about stimulus exit. Additionally, he might dismiss the near term risk of inflationary pressure as temporary. Rather, Fed would stay with the current highly accommodative stance, and look through near term fluctuation in inflation data, to medium term outlook.

Intraday bias in GBP/USD remains on the upside at this point. Current up trend from 1.1409 is in progress for 1.4376 long term resistance next. On the downside, break of 1.3950 minor support will turn intraday bias neutral, and bring consolidations, before staging another rally.