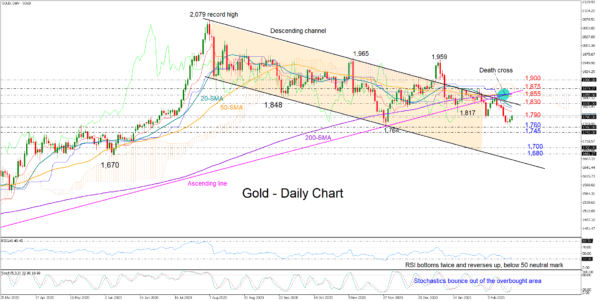 Gold is looking to claim the 1,790 resistance which kept the market on the downside over the past couple of days.

The RSI is endorsing the current positive momentum in the price as the indicator is trying to recover after refusing to create fresh lows in the bearish territory. The upside reversal in the Stochastics is also adding to this optimism. However, in terms of the trend, technical signals have further deteriorated following the death cross between the 50- and 200-day simple moving averages (SMAs), which is the first intersection between the lines in more than a year. Note that the 20- and 50-day SMAs also maintain a negative crossover.

On the upside, there are several barriers, which the bulls need to clear to in order to gain traders’ confidence. If buyers successfully breach the 1,790 hurlde, the red Tenka-sen line at 1,809 could block the way towards the 20-day SMA and the key surface of the descending channel around 1,830. Slightly higher, the 50- and 200-day SMA could set another trap with the help of the restrictive ascending line around 1,855, while beyond that, the 1,875 resistance from January may be the next trouble before all attention shifts to 1,900.

Alternatively, a pullback at 1,790 may bring the 1,760 – 1,745 region back under the spotlight, a break of which may steepen the sell-off towards the 1,700 round level. A step lower could stretch the downtrend to 1,680, last seen during the April – June period.

Summing up, gold may attempt to trim some of its previous losses in the near term, though a violation of the ongoing bearish trend could be a bigger struggle.