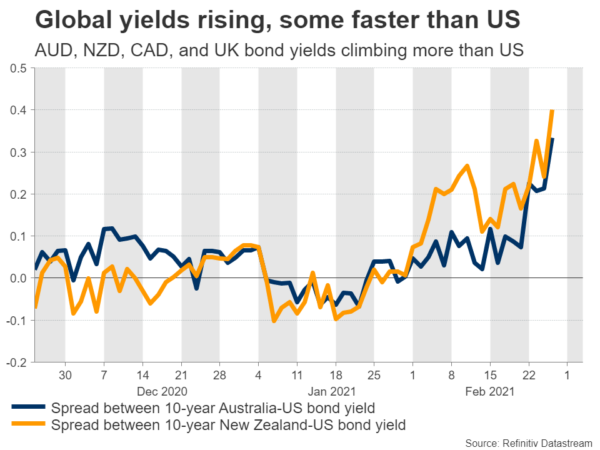 The testimonies by Fed chief Powell before Congress confirmed the central bank won’t overreact to any inflation episode but didn’t reveal anything new. The spotlight now falls on the next batch of US data at 13:30 GMT Friday. The dollar has stopped behaving entirely as a safe haven and has started to realign with US fundamentals, so every data point matters.

The mechanics governing the dollar are changing. After the crisis hit the greenback transformed into a safe haven, becoming a mirror reflection of stock markets. In recent weeks though, it has started behaving like the US currency again, reacting to economic data. The inverse relationship with stock markets hasn’t vanished entirely, but the process seems to have started.

The biggest story lately has been the non-stop rally in bond yields. This repricing appears to be driven by expectations for a cannon barrage of spending from Congress that blows up the federal deficit, boosts inflation, and ultimately leads the Fed to scale back its gargantuan QE program.

Higher US yields are normally a blessing for the dollar, but this hasn’t played out this time, which likely comes down to some foreign bond yields rising even faster than American ones. Long-dated yields in Canada, Australia, New Zealand, and even the UK have all matched or exceeded the surge in US yields.

Markets are adopting the view that the benefits from the supermassive US spending packages could spill over abroad, and perhaps allow these export-heavy economies – and Britain that is ahead in vaccinations – to recover even faster than America itself.

Turning to the upcoming dataset, personal income is expected to have risen by an astonishing 9.5% in January from the previous month. This spike probably reflects the $600 stimulus checks that were sent out as part of the previous relief package. Similarly, consumption is projected to have grown by 2.5%, a turnaround after a 0.2% decline in December.

On the inflation front, the core PCE price index – the Fed’s favorite inflation metric – is expected to clock in at 1.4% on a yearly basis, a slowdown from the 1.5% print in December. This would mirror a similar slowdown in the core CPI rate for the same month.

As for the risks surrounding these forecasts, an upside surprise in the consumption figure seems possible, considering the stunning surge in retail sales during January.

Dollar could outshine euro, but not commodity FX

In the bigger picture, the outlook for the dollar seems mixed here. If the FX market truly goes back to trading economic fundamentals, the reserve currency might perform better than the growth-starved euro, but lag behind the commodity-linked currencies.

The US economy is already much stronger than the Eurozone’s and the volley of federal spending alongside the faster pace of US vaccinations could grow this divergence further. Indeed, Eurozone yields have not risen as much as American ones lately, which means that euro/dollar has been marching higher despite diminishing support from relative interest rates. If this pattern persists, the latest gains in the pair could be short-lived.

Taking a technical look at euro/dollar, if buyers remain in charge, their next target might be the 1.2175 zone.

On the downside, if relative rates come back into play, the pair could cross back below 1.2220 and perhaps aim for the 1.2175 area.

In the same logic though, the commodity-exporting economies seem rock solid. Take New Zealand. The economy has staged an incredible recovery, the housing market is booming, commodity prices have skyrocketed, and vaccinations have begun. Australia is a similar story, even if it is not quite as strong.

The bottom line is that the dollar’s performance may vary, depending on what it is matched against. There is not much to be optimistic about in Europe, but the opposite is true for the antipodeans.