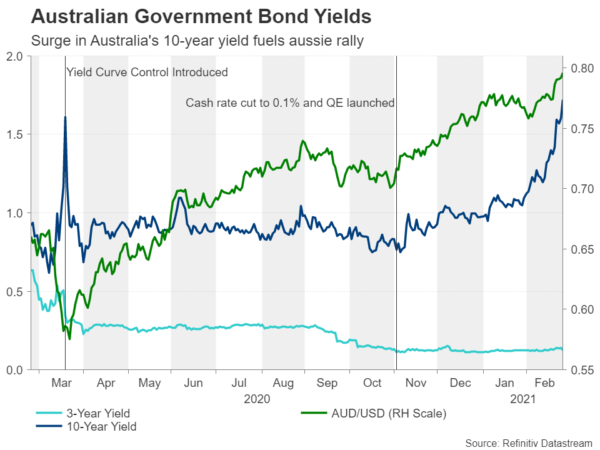 As a new month starts, investors will have their eyes locked on the latest nonfarm payrolls numbers out of the United States amid an accelerating selloff in bond markets. The Reserve Bank of Australia’s policy meeting will be the only central bank gathering of the week but is unlikely to provide much excitement. Canadian Q4 GDP figures are also on the agenda but the upcoming output meeting by OPEC+ might matter more for the oil-dependent loonie. It will be somewhat of a dull few days in Europe, though the pound may find plenty to propel it even higher if UK finance minister Rishi Sunak delivers a giveaway budget as rumoured.

RBA meets as it struggles to contain yield jump

The Reserve Bank of Australia is not expected to announce any policy changes when it meets on Tuesday, having only just added an extra A$100 billion to its QE program. However, with the local dollar rocketing past the $0.80 mark and Australia’s 10-year yield soaring to two-year highs, policymakers will probably attempt to play down some of the optimism flying around and reiterate that the economy still needs plenty of support. The three-year yield, which the RBA wants to keep at 0.1%, has spiked above 0.15% several times over the past week.

It will therefore be vital for the bank to come across as dovish as possible. But even if it succeeds, it will be hard to keep the aussie down for too long when the Australian economy is almost certain to make one of the quickest recoveries from the pandemic among the advanced nations.

Aside from the RBA meeting, traders will be keeping a watch on the flurry of domestic data, including January building approvals and Q4 net exports on Tuesday, the Q4 GDP estimate on Wednesday and January retail sales on Thursday. The latest manufacturing PMIs out of China on Monday will also be important.

Although none of the data are likely to spur any big reactions, there could still be a downside risk to the aussie should the numbers predominantly underwhelm, souring the mood.

GDP growth figures for the fourth quarter will be the sole highlight in Canada’s release schedule next week. Economic growth is expected to have moderated in the final months of 2020 as Canada experienced a surge in coronavirus cases during the period, prompting fresh lockdowns. Bank of Canada Governor Tiff Macklem recently tied the pace of the recovery to that of the vaccine rollout.

However, as far as investors are concerned, economic strength south of the border and the price for oil are the top priorities for Canada’s economic fortunes. Hence, even if Tuesday’s GDP print were to beat the forecasts, the Canadian dollar is facing a threat from a potential increase in oil output when the world’s major producers meet on Thursday.

The OPEC-led alliance is considering whether to ease the supply cut by 500,000 barrels per day, which would likely come in April if approved. However, given the modest size of the increase, what would be more crucial for oil-linked currencies is if OPEC+ signals that additional supply boosts are on the way.

If OPEC+ decides to raise output by only 500,000 bpd as is being predicted but is reluctant to commit to further hikes, there’s a good chance oil prices will remain on their current upward path. However, should members like Saudi Arabia feel more relaxed about loosening the curbs now that the vaccination progress globally and expected fresh fiscal stimulus in the US are lifting the demand outlook, that could spark a bit of a correction in the oil rally, which is looking overstretched.

It’s NFP week and after the recent soft numbers, February could be the month that the recovery in America’s jobs market gets back on track. The US economy added just 49k jobs in January, having shed 227k in December. Forecasts for February are for a 148k rise in nonfarm payrolls, while the unemployment rate is projected to tick up to 6.4%. A better reading is almost certain to intensify fears of the economy overheating and inflation shooting higher, lifting Treasury yields further.

Long-term Treasury yields have been rising relentlessly in February, with the 10-year yield crossing the 1.50% level for the first time in 12 months before the virus crisis struck. The surge in borrowing costs has now started to spook equities with shares on Wall Street taking a tumble in the past few days.

As for the US dollar, the rise in benchmark Treasury yields has been eclipsed by even greater increases in global yields, such as those of Australian, New Zealand and UK government bonds. Thus, after a strong start to the year, the dollar has been trending lower this month against all majors apart from the safe-haven yen and franc. A strong jobs report could shift some of the momentum back in favour of the greenback.

Other data that could potentially lure back dollar buyers are the ISM manufacturing and non-manufacturing PMIs, due on Monday and Wednesday, respectively.

However, what traders should be more wary of is which way the markets would go if there was another miss in the headline NFP figure as this could set off a major pullback in yields. The dollar is most likely to fall in such a scenario, though the reaction is not entirely clear. There’s a risk the US currency might end up standing tall should other government yields fall more steeply in response to a poor NFP showing, not to mention some added support from possible safe-haven flows.

Eurozone inflation to inch higher as euro perks up

It will be a relatively quiet week in the euro area, with the flash readings on February inflation on Tuesday being the main focal point. The final PMI prints on Wednesday and German industrial orders on Friday will be the other key releases.

The Eurozone snapped out of deflation in January when the annual rate of CPI jumped to 0.9% y/y. Underlying inflation also accelerated. The headline rate is forecast to rise again in February, to 1.0% y/y. However, although a bit of inflation would be ‘good’ for the euro area as it would eliminate deflationary risks once and for all, the European Central Bank hasn’t been as forthcoming as the Federal Reserve in revealing how far it is willing to let prices run hot. A faster-than-anticipated pick-up in inflation could fuel the rally in Eurozone government bond yields, boosting the euro, unless policymakers make it clear that they wouldn’t mind seeing inflation overshoot their target for a while.

One thing is clear, after losing relevance during the pandemic slump, inflation data is slowly taking precedence in the recovery phase.

Sterling has been on a roll lately, cracking the $1.40 handle for the first time in nearly three years. But as the rally pauses for breath, its best hope of resuming its furious ascent in the coming days is Wednesday’s Budget 2021 statement by the UK Chancellor of the Exchequer Rishi Sunak. With much of Britain still under a hard lockdown and the prime minister laying out a very cautious exit plan that stretches until June, Sunak looks certain to extend many of the government’s support programmes, including the very generous furlough scheme that is keeping millions of people in their jobs. The Chancellor could also announce new tax reliefs for some businesses. However, there is talk that some taxes could rise, with speculation rife of a hike in the corporation tax.

If the budget giveaways are as big as the markets are hoping for, that could be enough to reenergize the pound bulls, pushing cable above this week’s peak of $1.4235. But if the only surprises are around tax increases, the pound might struggle to regain positive momentum, especially if the dollar refuses to give ground.