Bank of Canada to Stand Pat, Keep One Eye on the Loonie as Recovery Gathers Steam 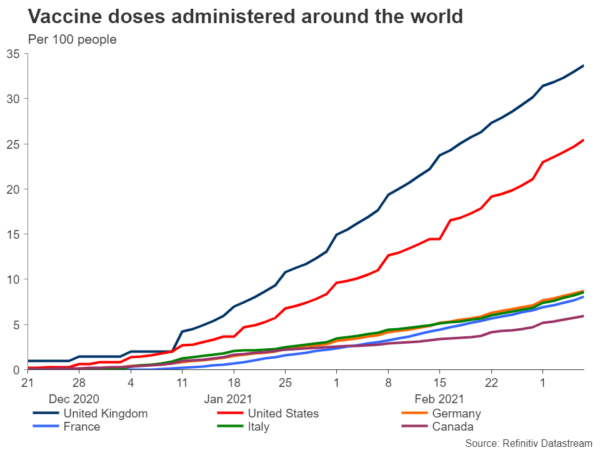 The Bank of Canada meets this week to set policy and will announce its decision on Wednesday at 15:00 GMT. No change is expected in either interest rates or the pace of asset purchases. But following the better-than-anticipated GDP performance in the fourth quarter, a booming housing market, soaring oil prices and renewed efforts to accelerate Canada’s vaccine rollout, speculation is growing about how soon policymakers will signal a tapering of their quantitative easing (QE) programme. In the meantime, the local dollar is basking near three-year highs against its US counterpart, amid a surge in Canadian government bond yields.

Some light amid the lockdown darkness

The Canadian economy has had its fair share of setbacks in the last few months. Several provinces were forced to reintroduce lockdown rules as the country was swept by a second wave of the coronavirus and vaccinations got off to a slow start, raising fears that Canada would get left behind in the global race to immunize. However, even against the backdrop of tight restrictions and shuttered businesses, the economy has been able to spawn engines of growth.

The housing market is reaping the benefits of cheap borrowing and a deluge of liquidity in the financial system. Housing starts jumped by 23% in January as home sales reached record levels. Governor Tiff Macklem has described the latest patterns as “signs of excess exuberance”. But while both the central bank and the government have the tools to cool down the red-hot property market, the recovery could be at stake should they try to. The housing and construction sectors are big employers so any attempt to curb activity when much of the rest of the economy is in dire straits could prove too controversial.

The energy sector is another bright spot. Although the new US administration’s tougher climate policy poses challenges for the future of big projects such as the Keystone XL pipeline, and in the short term, oil production is expected to take a hit from a month-long maintenance in Alberta’s oilsands, rising oil prices should nevertheless provide a significant boost to the industry. WTI futures are flirting with $68 a barrel and Brent crude has just cracked above $70 following the decision by the OPEC+ alliance to stick to current output caps rather than raise them. The lack of readiness by major producers to rush ahead with production hikes will likely keep prices elevated for the rest of the year.

But the recovery could soon be broadening as exports to the United States – Canada’s biggest trading partner by far – increased sharply in January as consumption south of the border was lifted by December’s stimulus package. With another and even bigger round of stimulus due to be signed off in Washington soon, Canada’s manufacturers look set for a bumper few months ahead.

Add to the mix the fact that Canada is finally managing to get a grip on its vaccination programme, with inoculations picking up pace in the past couple of weeks, all the ingredients are there for a full economic rebound by the year end (assuming of course nothing jeopardizes the global vaccine rollout such as a new resistant strain of the virus).

Is the Bank of Canada tapering?

So all this points to the Bank of Canada being done with easing during this cycle, but more importantly, it suggests tapering will likely be the central bank’s next move. In fact, the BoC has already begun scaling back its QE programme, reducing its weekly purchases from C$5 billion to C$4 billion in October. At the time, the Bank called this ‘recalibration’, but it might be harder to sell future reductions under this label when the need for extraordinary doses of monetary stimulus is diminishing fast.

Not only that, but investors have already started to price in rate increases, with the odds of a hike by October 2021 currently running close to 25%. As the Bank expectedly keeps policy unchanged at the March meeting, the focus will very much be on what clues policymakers lay in their statement about the future path of policy. Like its Australian and New Zealand counterparts, which are in a similar predicament, the BoC will probably want to maintai