EUR/GBP Near its Breaking Point 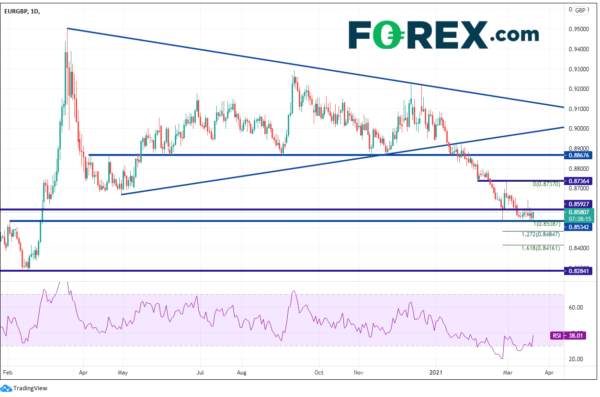 When the ECB met last week, Christine Lagarde and friends said that the ECB would significantly pick up the pace of bond buying under its Pandemic Emergency Purchase Program (PEPP).  This week, the BOE met.  Andrew Baily and his gang decided they would leave monetary policy unchanged, keeping bond buying at 875 billion pounds.  In Europe, coronavirus cases are entering a “3rd wave”, as countries and cities are either extending or implementing restrictions and lockdowns.  In the UK, schools have reopened and there is a plan of action to reopen the economy.  Theoretically, this means that the Euro should be moving lower vs the Pound, as more bond buying and lockdowns should weigh on the Euro.

The price action in EUR/GBP on a daily timeframe confirms this view.  As a Brexit deal became more and more of a “sure thing” in late December, EUR/GBP began to move lower. On January 13th the pair broke below the bottom trendline of a symmetrical triangle that the pair has been in since March 2020, and finally halted at support on February 24th,  near 0.8539, and formed a shooting star.  EUR/GBP bounced to horizontal resistance near 0.8736 briefly while unwinding an oversold RSI.  Price moved lower to the February 24th lows on March 9th and has been holding there since.  Note the RSI is moving higher, while price remains near the lows. The RSI now has room to move lower (if price moves lower), without moving into oversold territory immediately.

There is a plethora of UK data next week, including Claimant Count, Inflation data, and Retail Sales. If the net result from this data is stronger, EUR/GBP may push below the 0.8533 lows and continue with the longer-term trend.