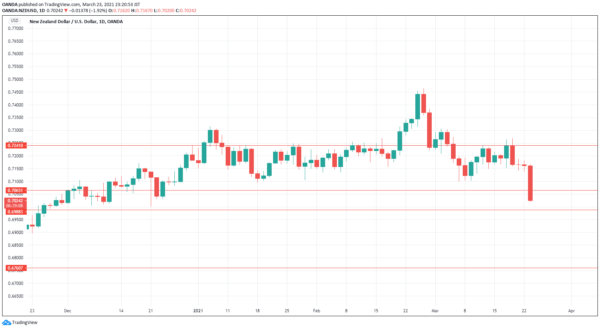 It has been a bloodbath for the New Zealand dollar on Tuesday, with the currency falling by 1.9 per cent. We haven’t seen a drop like this since the dark Covid days of March 2020. NZD/USD is struggling to stay above the 70 line, a psychologically significant level. The catalyst for the massive downward move was an announcement by the New Zealand government aimed at curbing housing prices, which have been rising sharply and have raised fears of a housing bubble.

New Zealand’s economy has recovered well from the Covid pandemic, but an unwanted result has been a property boom, with investors taking advantage of cheap mortgages. The government has introduced measures to chill speculation on the red-hot housing market. However, this move could have a profound negative effect on the economy. According to Satish Ranchod of Westpac Banking in Auckland, the announcements “indicate significant downside risk for house prices and economic activity more generally.” Investors were quick to react, with the New Zealand dollar falling sharply.

These moves are the latest salvos by the government to curb housing prices. In February, Finance Minister Robinson said that he would require the RBNZ to consider the housing market when setting monetary and financial policy.

Fed Chair Powell and Treasury Secretary Yellen will both testify before a House committee about the CARES Act, a relief fund for Covid-19 (16:00 GMT). The text of Powell’s testimony was released on Monday, with Powell noting that the economy has recovered more quickly than expected. Investors will be looking for clues about future monetary policy from Yellen as well as from four Fed governors who will also be delivering speeches during the day.