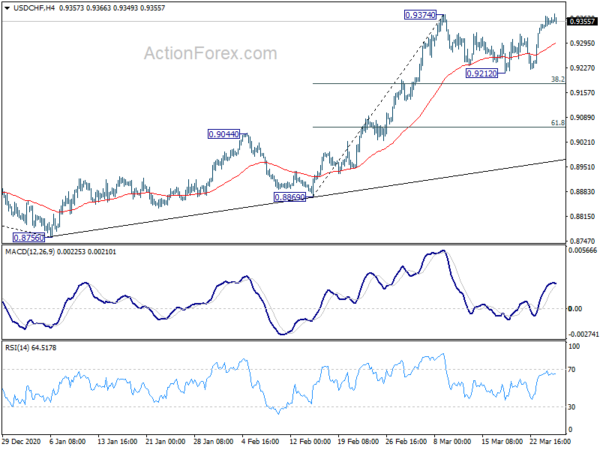 Sterling trades mildly higher in rather quiet market today while Euro and Yen turn softer. Dollar is attempting to extend this week’s rally after better than expected jobless claim data. But no follow through buying is seen in the greenback yet. Swiss Franc’s selloff slowed mildly after SNB upgraded inflation forecasts. But then recovery is so far rather weak. Commodity currencies turned into sideway consolidations, but remain vulnerable.

Technically, it appears that EUR/GBP was rejected by 0.8638 minor resistance, keeping near term outlook bearish. We might see a retest on 0.8532 low next. At the same time, GBP/JPY recovers well ahead of 148.09 cluster support. Focus could be back on 150.31 minor resistance should current recovery extends. If these two levels are broken, Sterling’s buying could come back.

US initial jobless claims dropped to 684k, continuing claims down to 3.9m

Fed Powell: 2021 going to be strong than previously though on a combination of better developments

In an NPR radio interview, Fed Chair Jerome Powell said 2021 going to be stronger than previously thought, because of a “combination of better developments” including vaccines and fiscal stimulus.

“As we make substantial further progress towards our goals we will gradually roll back” the asset purchase program. He emphasized, the “process will take place with the greatest transparency.” And that would only happen “when the economy is all but fully recovered.”

On other topics, Powell said, “level of debt today is not unsustainable, no question of US being able to service its debt right now.” “Climate change is an important issue we will be dealing with for a long time with significant economic implications.”

SNB keeps policy rate and interest on sight deposits at -0.75% as widely expected. The central bank said “it remains willing to intervene in the foreign exchange market as necessary, while taking the overall currency situation into consideration.”

New conditional inflation forecasts for 2021 and 2022 were revised higher. This is “‘primarily due to the rise in oil prices and the weaker Swiss franc”. But, “looking beyond the two-year horizon, the inflation forecast is virtually unchanged compared with December”. The forecasts now stands at 0.2% for 2021, 0.4% for 2022 and 0.5% for 2023.

SNB expects the GDP growth of 2.5-3.0% for 2021. Activity is likely to return to its pre-crisis level in the second half of the year. But production capacity will remain underutilized for some time yet.

Germany Gfk consumer climate rose to -6.2, just a flash in the pan

Rolf Bürkl, GfK consumer expert: “The hard lockdown will severely damage consumer confidence and the current improvement will remain a flash in the pan. A sustained recovery in consumer confidence will continue to be a long time coming — which means difficult times ahead for retailers and manufacturers.”