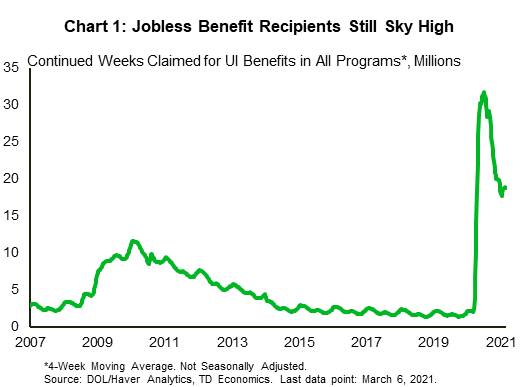 Equity markets see-sawed this week as investors were pulled between positive economic news and concerns about rising bond yields and rising Covid-19 cases in Europe. After several weeks of increases, there was some give back in the 10-year Treasury yield, even as Fed speakers seemed relatively unconcerned about the move up in yields.

One positive economic headline came from the weekly jobless claims, which were at the lowest level since the pandemic began. Claims are moving in the right direction, but the headline lacks context. 684 thousand claimants in the week of March 20th is still higher than any of the worst weeks in 2009 during the Great Recession. Also, that figure only accounts for regular state benefits, which many workers have exhausted a year into the pandemic.

Looking at continuing claims in all programs – including the emergency federal pandemic programs – 7.2% of the 16+ population (or nearly 19 million people) were collecting benefits of some kind in early March (Chart 1). That is a staggering number, which in part reflects the expansion of benefits under last year’s CARES Act, but also the steep hill left to climb when it comes to the job market.

This was the message echoed by many Fed speakers this week. Namely, that the Fed will continue to provide support to the economy until the job market recovery is “well and truly done” and that the recovery is “far from complete.” The ramp-up in vaccinations we are seeing is critical to accelerating the employment recovery, which lost momentum in the winter as lockdowns were tightened.

The job market recovery will accelerate once spending on services does. Services industries are far more employment-intensive than goods ones, and much of the goods consumption in the U.S. is imported, and does not generate as many jobs domestically (Chart 2). For services spending to normalize further, people need to feel safe returning to close-contact and group activities like movie theaters and travel. This is likely to take place once people, particularly those who are more vulnerable, are vaccinated.

Next week we will get the March jobs numbers, which we expect will show continued improvement, but our forecast calls for employment growth to really pick up the pace in the second quarter, as vulnerable populations as well as a significant swath of the adult population are vaccinated.

In that context, the weak February data released this week is likely to prove a pothole on the road to a much stronger recovery in the spring. The severe winter storms that caused blackouts and disruptions in large parts of the southern U.S. were partly to blame for the drop off in spending and home sales in February. However, with the very low inventory level of homes on the market – down almost 30% relative to a year ago – prices remain lofty. The median single-family home price is up over 16% versus a year ago – the fastest pace since 2006. That may seem an ominous comparison, but the dynamics are very different. Activity in the resale market on a trend basis is nowhere near the heady days of 2005-06, and we expect as the risks from the pandemic ebbs, more people will be enticed to list their homes, taking some pressure off prices.

The first day of spring brought sunshine, warmer weather, and a very exciting budget season. This week saw Ontario, Quebec, and Nova Scotia release their 2021 plans. And finally, after two years in the making, the federal government announced that the national budget will be tabled on April 19th. There is much curiosity on what the federal government will prioritize as the economy emerges from the pandemic, but one thing is certain, fiscal spending will be elevated for some time to come.

Provinces are already signaling this in their budgets. Recognizing the continued challenges to the economy and to address the vulnerabilities exposed by the pandemic, both Ontario and Quebec announced several new spending initiatives. Ontario introduced a third round of payments to parents through the Ontario COVID-19 Child Benefit, made $1.7 billion available to small businesses and is investing $400 million over the next three years to support the tourism, hospitality and culture industries. Quebec is investing $2.9 billion in health care and allocating $300 million to improving living conditions for the elderly.

Notably, both provinces did not include any new tax measures in their respective budgets. The debt burden, as measured by the debt to GDP ratio, is brought lower over the next several years through stronger economic growth that outpaces annual deficits (Chart 1). In terms of balancing the books, the provinces do not expect to see that happening until fiscal year 2027-2028.

The combination of sustained support from provinces and a stronger-than-expected economic recovery so far, has raised questions on whether federal stimulus needs to be as extensive as what’s be