Week Ahead: Where Do We Start? 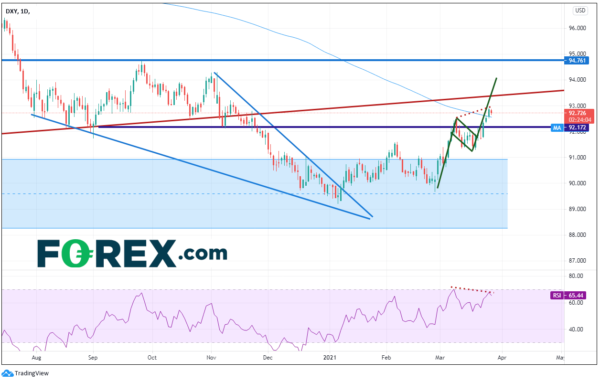 This could be one of the busiest weeks of the year for the markets or it could be extremely dull.  The coronavirus is still plaguing Europe. With more lockdowns and restrictions on the way, the vaccine rollout continues to be slow.  There is still a ship stuck in the Suez Canal, but if jarred loose soon it may have minimal impact.  OPEC meets this week as well:  If the Suez Canal is still closed, will they raise production and find other shipping routes? US President Joe Biden is rattling markets as talks continue with regards to increasing taxes and $3 trillion of infrastructure spending.  Although most markets are closed on Good Friday, the US will still release NFP!  In addition, it’s end of month and end of quarter, which may bring some volatility.

Europe is reeling from a 3rd wave of the coronavirus.  Many of the new cases are the result of the spread of the UK variant, as well as the slow vaccine rollout across much of the continent.  Increases in new daily cases in Italy, France, and Poland have forced new lockdowns and restrictions.  German chancellor Angela Merkel has called this a “new pandemic”, as she is forced to extend lockdowns for Germany. However, she stopped short of a complete shutdown over the 5-day Easter holiday after protests in the country.  Boris Johnson said the UK was successful at rolling out the vaccine because of “greed” and “capitalism”.  Tensions are building between the UK and the rest of Europe as the UK is holding promised doses from the EU.  Meanwhile, the EU is threatening to withhold exports to the UK as Ursula von der Leyen said that AstraZeneca must honor EU commitments before they export further doses.  Germany may turn to Russia for vaccines. Eyes will be watching this week to see if tensions heat back up between the UK and EU after lengthy and tense Brexit negotiations.

In the US, after some initial bumps the vaccine rollout is going smoothly, however cases are beginning to pick up in certain areas of the country. Joe Biden’s initial goal was 1 million vaccinations within 100 days.  As the US has reached that point easily, he now has vowed 2 million within 100 days.  The EUR/USD dropped from a high of 1.1947 down to 1.1762 last week. See more EUR/USD analysis from my colleague Matt Weller:  EUR/USD at a year-to-date-low: How low can it go?

Have you heard the one about the container ship stuck in the Suez Canal?

On Tuesday last week, a container ship got stuck sideways in the Suez Canal.  But if that wasn’t bad enough to halt traffic, this is: IT’S STILL THERE!  According to Reuters, as much as 30% of the world’s shipping container freight passes through there every day and amounts to 12% of the total goods traded globally.  Yikes! So, what now? The world waits while salvage firms hope to dislodge the ship.  Egyptian officials say it the ship will be free within 48-72 hours, but no one is holding their breath. Meanwhile, hundreds of ships are backed up waiting to pass through the canal.  Will this affect global prices and supply of everyday products if this continues, such as toilet paper (which is made from wood pulp and passes through the canal)?  How about oil, which affect prices at the pump immediately when prices rise?  Oil prices were extremely volatile last week.  Will the volatility continue if the ship cannot be moved in a timely fashion?

OPEC meets this week!  Recall that at the last meeting in March, while many expected a hike, OPEC left supply unchanged. Saudi Arabia continued to carry most of the burden while Russia continued production of 1,000,000 bpd.  However, regardless of the ship in the Suez, API builds and expectations of lower demand in Europe may have OPEC+ keeping supply unchanged once again.  A surprise hike could have oil prices moving lower.

After the successful passage of US $1.9 trillion stimulus package, which included $1,400 per eligible person,  President Joe Biden is on a spending spree!  This week, he will discuss his proposed $3 trillion “Build Back Better” infrastructure project.  However, Republicans most likely will not be on board with the package.  Trillions more in spending after the stimulus package is not what may Republicans signed up for.  How does the President intend to pay for this?  Possibly by raising taxes.  Biden is looking to raise the corporate tax rate from 21% to 28%, as well as, increase taxes on those making over $400,000 (possibly those making even less).  Treasury Secretary Janey Yellen said during her congressional testimony that she supports raising revenue to support “permanent spending”.  Have traders priced tax hikes into the market yet?  Or is the market still high on stimulus checks?  The S&P 500 and DJIT are near all time highs, while the NASDAQ (which incudes stocks of companies which  would be hardest hit by tax hikes) is near 7.5% from its all-time highs.

Not much to speak of, given this week brings the end of quarter.  A few companies’ earnings to watch are as follows:  LULU, CHWY, MU, WBA, and NXT

In addition to it being end of quarter, its also end of month!  Although many of the month end reports were out last week, the beginning of month reports will be highlighted! This includes Non-Farm Payrolls on Friday, which is Good Friday.  Many of the world markets are closed on Friday, including the US.  However, for some reason, every time Easter is on the first Sunday of April, the US government insists on putting out economic data.  Early expectations are for an increase of 655,000 jobs vs +379,000 in February.  Warning: given that the FX market is the only market open, prices could become extremely volatile around this number, especially if there is a big miss!  Be very cautious with positions at the end of next week. Check out our economic calendar.  Some other notable economic data next week is as follows:

Chart of the Week: Daily US Dollar Index (DXY) After trading sideways since the beginning of summer, the US Dollar Index has been in a descending wedge since November.  The index bottomed on January 6th as price moved towards the apex and on January 8th, the index broke higher out of the wedge.  The target for the breakout of a descending wedge is a 100% retracement of the wedge, near 94.00.  However, nothing moves in a straight line and price traded sideways before moving higher.  In doing so, recent price action formed a flag formation at resistance near 92.17.  Last week, price broke above the flag.  The target of a flag breakout is the length of the flagpole added to the breakout point of the flag, which is near 94.00 (same as the descending triangle target).  The DXY also crossed about the 200 Day Moving average on Thursday.  However, the RSI is overbought, indicating price may be ready for a pullback on its way to target.  Support is at the 200 Day Moving Average near 92.53 and horizontal support near 92.17.  Resistance above is at a weekly, upward sloping trendline (red) which dates back to April 2011, near 93.40.  Above that is the November 4th highs at 94.30.

If you live the in UK or Europe, don’t forget to move your clocks forward this weekend!