Week Ahead: Coronavirus Worsens, and the Bickering Begins Over Biden’s Infrastructure Plan 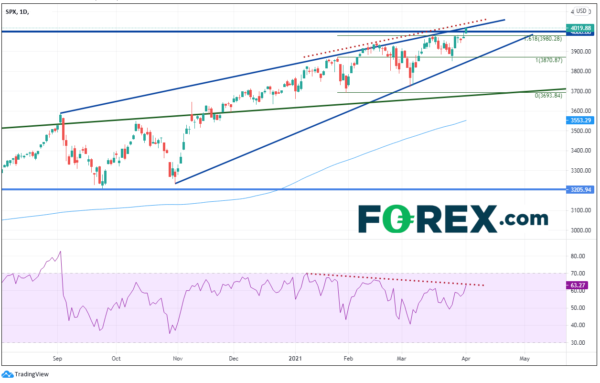 Monday is a holiday and many of the major markets will be closed.  Now that month-end and quarter-end are behind us, as well as Non-farm payrolls and OPEC, the focus for the markets will turn back to the rising number of coronavirus cases, particularly in Europe and Canada.  In addition, it will be a long next couple of months of bickering between US Democrats and Republicans over President Joe Biden’s $2 trillion infrastructure plan.  With many central banks turning their attention away from interest rates and inflation expectations to employment, jobs data will be closely monitored.  This week brings global Non-manufacturing PMIs and Canada employment data, as well as the Interest Rate Decision from the RBA.  Comments from RBA officials lately have been extremely dovish.  On Tuesday we’ll find out if this trend continues.

Europe seems to be in dire straits. France announced they will enter another lockdown and close schools until the end of April.  Italy is extending its restrictions through the end of April as well. German leaders are calling for a national lockdown as new daily cases continue to rise, and AstraZeneca has been restricted to only those under the age of 60 due to continued controversy over blood clotting. The general vaccine rollout continues to be slow.  The ECB has stuck to their word and over the last 2 weeks has been buying 20 billion Euros with of bonds, as opposed to 15 billion before their last meeting.  EUR/USD has fallen from 1.2350 to start the year down to 1.1704 last week.  Yet, the manufacturing data remains strong.  This week we will see the final services PMIs, however with lockdowns through April, they will likely be dismissed.  Can Europe slow the number of rising coronavirus cases and get the economy moving again?

In Canada,  the Covid-19 new daily cases have risen to levels which have led to a lockdown in Ontario and heavy restrictions in other Provinces.  The Bank of Canada is worried about rising housing prices and household debt. Until recently, the BOC has been the frontrunner as the first of the major central banks to begin tapering.  That may be on hold now because of the rise in cases and slow vaccine rollout.  We’ll find out on April 21st when they meet for their Interest Rate Decision.  Markets will be monitoring the situation closely to determine when restrictions could ease, and people could be back to work.

Joe Biden was sworn in as US President on January 20th.  Since then, he has managed to pass a nearly $2 trillion stimulus package and has proposed an infrastructure plan worth just as much.  He also has indicated that he plans to raise taxes to pay for the plan.   The infrastructure plan may not be as easy to pass as the stimulus package.  Republican Senate minority leader Mitch McConnell said he will fight the plan “every step of the way”.  Raising taxes, especially corporate taxes, to pay for the project is not something Republicans will let pass without a fight, which is said can drag into the summer and possibly even the fall.  But stock markets loved the idea of getting people back to work and spending.  The S&P 500 crossed above 4,000 for the first time ever and, along with the Dow, closed at all-time new highs for the week!

The US Non-farm payrolls were released on Friday.  The number was 916,000(!) vs 654,000 expected.  With the revision to February’s print, the 2-month total is 1.4 million!  The unemployment rate dropped to 6% and the Average Hourly Earnings was -0.1% (no wage inflation!). With the vaccine rollout continuing in the US (some days reaching 3 million jabs) and new stimulus check in hand, the US seems to be on its way to a summer surge in hiring and spending.  This week Canada will release its employment data as well.  However, with parts of Canada currently in lockdown, the data may not matter as much.  As mentioned, the BOC meeting on April 21st will be important to watch.  This week brings the RBA interest rate decision meeting and senior members have indicted they will not raise rates until inflation is sustainably back in the 2%-3% range, which they don’t expect until 2024!   However, just as with New Zealand, rising housing prices are a concern.  Will this be enough for RBA to adjust monetary policy?  Along with the RBA, the economic calendar also brings Service PMIs and the FOMC minutes from their March meeting. Some of the more important economic data is as follows:

Chart of the Week: Daily SPX The S&P 500 has been a beast since recovering from the March 2020 pandemic lows.  The large cap index put in a low of 2191.86 on March 23, 2020.  The current price is above 4000!  Price has nearly doubled in 1 year.  Since the Autumn of 2020, SPX has been trading in an ascending wedge (as opposed to just moving straight up off the lows).  On Friday, price cleared 2 resistance levels and has 1 more to overcome in its quest to continue higher.  First, price pushed through the 161.8% Fibonacci extension from the highs on January 26th to the lows on January 29th, near 3980.28.  Second, is the psychological 4,000 level, which it rose above for the first time ever! The only major resistance level left is the top of the upward trendline of the ascending wedge, which crosses near current highs at 4020.  The RSI has been diverging since the beginning of the year, so at this point, its irrelevant. March 31st and April 1st may has seen some rebalancing/beginning of month flows come through to help push the index higher, but unless the SPX pulls back below the bottom trendline of the wedge (near 3,850), many would still consider it strong.  Even then, the long-term trendline (green) dating back to January 2018, near 3700,  still makes SPX look bullish.  If price begins to approach the 200 Day Moving Average at 3553.29, long term bulls may begin questioning long positions.

As we begin a new month and a new quarter, the focus will continue to be the mutations of the coronavirus and the vaccine rollouts.  Central banks have indicated they are concerned more about employment, and less about inflation.  Therefore, if central banks remain extremely accommodative, risk-on may continue.  And don’t forget about the nearly $4 trillion is fiscal stimulus in 2 months from the US government!  Down the line, the question will eventually become, “What happens when the stimulus ends?”.  But for now, the printers are still hard at work.

If you are celebrating the Easter weekend, enjoy and be safe!