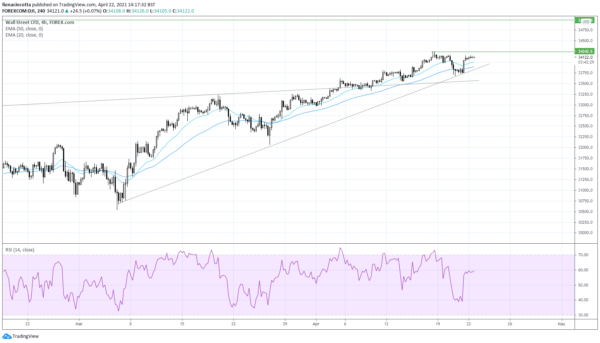 The improvement in the US labour market which was seen last week continued. 547K Americans made initial claims, down from 586k recorded last week and well below the forecast rise to 617k.

This is the lowest level for jobless claims since the pandemic and reveal that the recovery in the labour market remains on track.

Investors continue to wrestle over the vaccine led recovery and stronger earnings against rising covid cases particularly in India and Japan. Cases in India breached 300,000 a new grime global milestone.

Airlines will be in focus after results were not as bad as feared. Strength of demand for airline shares could provide clues as to the strength of the reopening trade.

Jobless claims are by far the most important US macro data to be released this week, a week that has been dominated by earnings.

US pledge on Earth Day

President Biden has pledged to cut the carbon dioxide emissions by 50% by the end of the decade compared to 2005 levels.

The pledge comes as the US looks to re-establish itself as a leader of the environmental agenda, after years of falling behind with Trump.

The new targets mean an accelerated move away from combustion engines in transportation. EV’s will be increasingly more in focus. Elsewhere, companies which are reducing their carbon foot print will be better positioned to respond to climate change risks and tightening regulation going forward.

Where next for the Dow Jones?

The 20 EMA & 50 EMA are both pointing marginally higher as is the RSI suggesting that a move higher could be the path of least resistance.

Immediate resistance sits at 342248 the all time high, a move beyond here is needed to move towards 35000 round number. As expected, the ECB left rates and the PEPP unchanged as expected. With no new economic projections due until June, the ECB announcement has turned into a bit of a non-event.

Attention will now turn to the post meeting press conference with ECB President Christine Lagarde. With the vaccine rollout picking up and business sentiment improving we could hear a slightly more upbeat tone from the central bank President

Oil prices are falling for a third straight session amid an unexpected build in crude stockpiles and as covid cases soar in India and Japan.

At the same time covid cases are soaring in India and Japan, the world’s third and fourth largest consumers of oil respectively. More states in India are implementing lockdowns and Tokyo & Osaka are both on the brink of imposing curbs. As a result, the demand outlook for oil has softened hitting sentiment for oil.