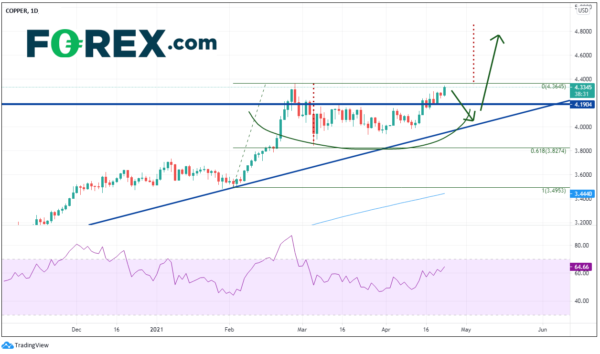 Heading into the end of April, central banks and earnings will give direction to the markets.  The ECB held its ground last week while the BOC chose to taper bond purchases from C$4 billion per week to C$3 billion per week. Are the FOMC and the BOJ in the same position to do so?  As richer countries reopen, poorer nations are still reaching daily new highs in coronavirus cases.  Can they get it under control anytime soon?  Also, US President Joe Biden will give his first speech to Congress, which will include an increase in the capital gains tax. Will there be fallout in the markets? BIG tech earnings this week.  How will their guidance be tied to reopenings? In addition, end of month means end of month data!  Q1 GDP is sure to be the headline grabber!

The BOC has been the favorite to first raise rates. However, with the recent wave of coronavirus cases and lockdowns in Canada, that was in doubt heading into the meeting last week.  However, the BOC didn’t falter and cut bond purchases by C$1 billion per week.  The ECB stood pat and provided little new information.  So where do the FOMC and the BOJ stand?   At the March meeting, the FOMC left rates unchanged and noted that bond purchases would continue at its current pace until employment fully recovered and inflation was sustainably above 2%.  Although the labor market has picked up, it is still well below pre-pandemic levels.  However, without new forecasts (dot plots) at this meeting, expect more of the same. Much of the same can be said for the BOJ, who meet on Tuesday.  At their last meeting, they announced they would widen the band around the zero target on the 10-year JGB from 20bps to 25bps, removed guidance that they will buy JPY6 trillion annually, and noted that they will no longer buy ETFs from the Nikkei, only the Topix.  The BOJ is likely to remain on hold until they have more time to see the effects of these decisions.  In addition, with coronavirus breakouts across the country, the central bank is unlikely to act again until the pandemic is back under control.

Speaking of the coronavirus in Japan, Tokyo, Osaka, Kyoto and Hyogo and heading back under State of Emergency.  With the Olympic games beginning in 90 days, this is a concern.  Japan is far behind the US and UK in vaccinations, administering to only ~1% of population.  India is in big trouble, as they are reporting over 300,000 new cases a day and hospitals are overwhelmed.  India has orders to buy millions of vaccine doses, however they are not expected until July. Russia has announced a 10 day “non-working” period to prevent a virus surge, even though their Sputnik vaccine has an efficacy of 91%.  The WHO said new daily cases are also increasing in countries such as Brazil (still), Argentina, Turkey.  Europe is on its way out of lockdowns, as the UK and US continue to have blowout economic data due to reopenings.  Retail sales from the UK released last week showed an increase of 5.4% for the headline number in March vs 1.5% expected.  The US released Retail Sales data a week earlier.  The headline was 9.8% vs 3% expected.  US jobs data is similar.  Traders need to consider the different stages of reopenings for each country to determine when one currency may outperform another.  For example, will the Euro outperform the US Dollar now that the US is at a more mature stage of the reopening? Or is the US recovering too quickly for the Europe to catch up.  This will be an important question for traders to ask moving forward.

On Thursday last week, “sources” announced that Joe Biden is going to propose increasing the capital gains tax on those that make over $1,000,000 from 20% to nearly 40%.  The S&P 500 sold off nearly 50 handles on the news, however gained it all back on Friday.  On Wednesday, Joe Biden will speak in front of the Joint Sessions of Congress after his first 100 days in office.  The newly elected US President usually gives this speech in February, however because of the current extraordinary circumstances in the world today (the pandemic), the speech was pushed back until now. Infrastructure spending, increased taxes on wealthy,  updates on the coronavirus, geopolitical tensions, and police reform will all be topics that traders will be looking for!

Those who have large stakes in some of the companies reporting earnings this week may be on the list of people who will have their capital gains taxes increased.  All the FAANGs will report this week (minus Netflix which reported last week) as earnings season kicks into high gear! In addition, Elon Musk and TSLA will report earnings on Monday. Other important earnings to watch are as follows:   TSLA, SBRY, AZN, MMM, GOOG, RDSA, AMD, AMGN, BARC, LLOY, GE, SBUX, V, TXN, UPS, AAPL, BA, F, EBAY, FB, AMZN, GSK, BMY, MRK, MCD, X, CAT, MA, TWTR, XOM, CVX

In addition to the central bank meetings this week, the US will hold a 7-year note auction, Germany will release their Employment Change, and Q1 GDP Growth Rates from several countries will be released. Other important economic data to watch this week is as follows:

Chart of the Week: Daily Copper As copper is an industrial metal, the price of copper is said to show the health of the world economy.   A strong copper price shows that the economy is strong and will be growing in leaps and bounds.  A weak copper price shows that the economy is frail, and the world economy may be contracting.  As a result, the commodity has received the nickname “Doctor Copper”.  Copper has been in a strong uptrend since putting in pandemic lows in March 2020.  On February 23rd, the metal took out all time highs near 4.19, only to pullback 2 days later.  Price pulled back to the 61.8% Fibonacci retracement level from the lows of February 2nd to the highs of February  23rd, just above 3.83.  In doing so, copper formed a rounded bottom in an uptrend.  Copper is testing the February 23rd highs of 4.3645, currently trading at 4.336.   If price holds the resistance, first support is the highs from 2011 near 4.1904.  Below there is an upward sloping trendline from October 2nd, 2020 near 3.97.  If price holds either of these support levels and then moves higher, it will form a cup-and-handle pattern. The target for a cup-and-handle formation is the height of the “cup” added to the breakout point, which would be near 4.85!

With more central banks meetings this week, bigtime tech earnings, and continued increases in coronavirus cases in many parts of the world, this week will provide traders with tons of information.  Throw in recent strong economic data, end of month price action, and stocks near all time highs, and markets may see some volatility heading into May!