FOMC Policy Meeting: Policymakers May Keep Their Cards Close to Their Chest 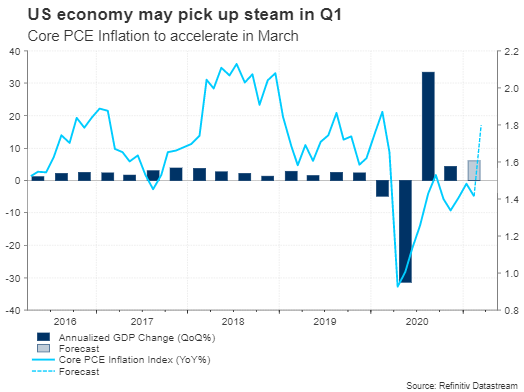 The Fed’s policymaking arm will conclude its two-day policy review on Wednesday, with the announcement and the press conference expected to hit the headlines at 18:00 GMT and 18:30 GMT respectively. There are rumours that bond tapering talks may wrap up, but board members will probably keep the cards close to their chest and maintain the same guidance even if Q1 GDP growth figures due on Thursday and core PCE inflation data on Friday surge. If the Bank hints at tapering in advance, the dollar may find new buyers, though such an action may come at a later stage.

The shining US economy

The Bank of Canada was the first among major central banks to plot its policy normalization route last week as it praised a warmer-than-expected economic recovery, cutting the pace of its bond purchases and bringing forward the timetable for a potential rate increase. Although investors have been expecting the BoC to be more aggressive in scaling back its massive stimulus than the Fed given the fact that Canada has recouped a larger share of its labor slack than the US, the event raised questions about the Fed’s stance.

Compared to Canada, the US has a brighter outlook and is expected to return to normality sooner, as its vaccination program runs without interruptions. Notably, the preliminary GDP growth figure is expected to spike from 4.3% to 6.1% (annualized) in the first three months of the year. The Fed’s closely watched core PCE inflation index may not surpass the 2.0% threshold in March, but a potential upturn from 1.4% y/y to 1.8% would still be significant on Friday.The personal income and consumption figures accompanying the inflation report could add to the cheerful numbers. The former may have impressively experienced a double-digit expansion of 20.1% m/m in March thanks to the latest stimulus checks provided by the government, while the latter is forecast to rise at a softer but robust pace of 4.3% m/m from -1.0 previously.

Ignore what the Bank of Canada just did

Despite the BoC’s recent moves and the latest bang in Nonfarm payrolls in April, the Fed will probably stay on course, leaving interest rates within the record low range of 0-0.25% and its monthly bond purchases at $120 billion on Wednesday. The Bank has even managed to calm the persisting inflation fear factor as reflected by the down-trending 10-year Treasury yield, attributing the growth in prices to transitory factors. Therefore, any words of tightening at this meeting would downgrade its credibility and trigger another rally in yields.

Press conference could move the dollar

The press conference, however, may not be easy for Fed chair Jerome Powell as he is likely to receive a barrage of questions aimed at re-examining plans of bond tightening this year following the Bank of Canada’s initiative. If Powell cannot resist, unveiling some positive thinking about unwinding bond purchases earlier than previously thought, the dollar could accelerate, likely sending dollar/yen up to 109.00 and near the 20-day simple moving average (SMA). Beyond that, the door would open for the 109.70 resistance area.

Speaking in an interview broadcast a few weeks ago, Powell admitted the outlook has improved significantly, but substantial risks continue to linger in the background. Hence, although more optimistic language cannot be excluded given the continuous economic progress, he is largely expected to stick to the script, reiterating that interest rates will not rise before 2024 and the pace of bond purchases will remain steady until recovery reaches a sustainable path and full employment conditions dominate.

Perhaps June’s meeting, which will include new economic projections,will be a better time to prepare markets for any bond tapering actions or at least create some flexibility if economic data move beyond the central bank’s forecasts next month. Apparently, the Fed aims to achieve a smooth transition to the tightening phase. So, it will likely avoid any surprises this week. That said, given the striking economic improvement, the more patient the Fed holds, the larger the odds become for a sudden telegraph and a sharp bounce in the dollar.

In the event the Bank uses a more cautious tone than analysts anticipate, underlining the importance of an easing monetary policy and calling any stimulus withdrawal plans premature, dollar/yen could drift lower to test the bottom of the ascending channel and the key support region around 107.76, a break of which is expected to spark a more aggressive decline towards the 106.65 barrier.