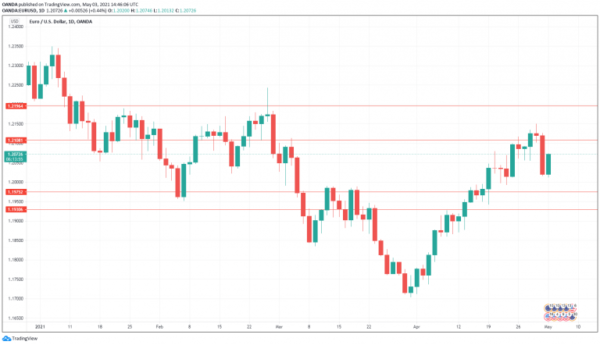 Germany, the eurozone’s largest economy, impressed with a Retail Sales report for March that crushed the consensus. The gain of 7.7%, which followed a 1.2% gain, easily beat the forecast of 2.9%. It was the highest gain in 10 months and points to stronger consumer demand.

It was a brutal Friday for the euro, which tumbled 0.82%. This was its sharpest one-day decline since February 26th. The US dollar registered broad gains on Friday, as investors showed a strong appetite for US bonds in month-end rebalancing flows.

The US dollar also received support from strong US data on Friday. The Core PCE Price Index, which is considered the Federal Reserve’s preferred inflation gauge, rose to 0.4% in March, up from 0.1% beforehand. This is another indication of inflationary pressures in the US economy, which continues to fire on all four cylinders. The Fed insists that any spike in inflation is temporary, but if inflation numbers continue to rise in the coming months, the Fed may have to acknowledge that higher inflation levels.

At the FOMC meeting last week, Fed Chair Powell stated, in response to a direct question, that it was premature to taper the Fed’s bond purchases. Just two days later, Fed Governor Robert Kaplan, who is not a voting member, made headlines when he urged the Fed to start talking about its asset-purchase program. The Dallas Fed Governor warned of imbalances in financial markets, with the economy rebounding from the Covid downturn faster than anticipated. The Fed’s position remains that its QE program of 120 billion/mth is still needed, but there are likely other voices in the Fed besides Kaplan who are concerned about the consequence of too much stimulus.