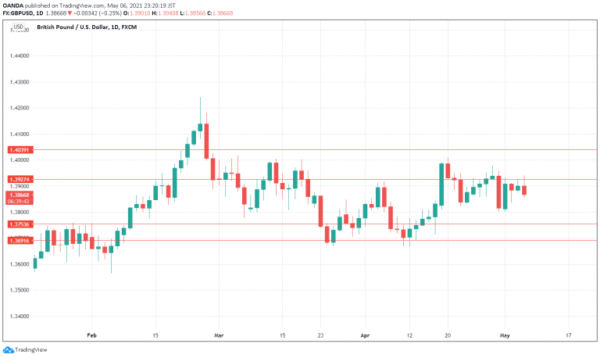 In Thursday trade, the pound lost ground but has recovered. In the North American session, GDP/USD is trading at 1.3898, down 0.02%.

BoE to slow pace of QE

The Bank of England announced at its policy meeting that it would slow the pace of its QE programme, but emphasized that it was not tightening monetary policy.

The bank left intact the size of QE at 895 billion pounds but said it would scale down its purchase of bonds from GBP4.4 billion a week to 3.3 billion a week. The bank stressed that this did not mark a tightening of policy, saying “this operational decision should not be interpreted as a change in the stance of monetary policy”. If the goal of bank policymakers was to avoid a shakeup of the financial markets, they succeeded, as the response of the FTSE and the pound has been muted.

In a follow-up press conference after the decision, BoE Governor Andrew Bailey noted that the economic recovery was moving faster than the central bank had previously forecast, but urged caution, saying there was no need to get “carried away”.

The BoE maintained its benchmark interest rate at the all-time low of 0.1% and the QE programme at 895 billion pounds. There was an interesting development as BoE chief economist Andy Haldane was the lone vote to reduce QE by 50 billion pounds. Haldane has warned of a possible “inflation tiger” that could prove difficult to tame.

Overshadowed by the BoE decision was an excellent Services PMI for April. The index rose to 61.0, up from 56.3 and above the forecast of 60.2 points. This was its highest level since October 2015 and points to strong growth in the services sector, as the economy continues to reopen.