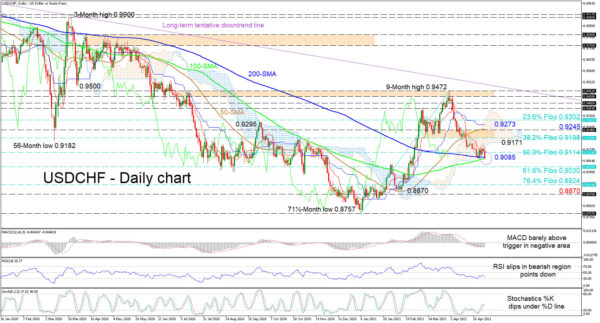 USDCHF is trying to break below the 200-day simple moving average (SMA) around the 0.9085 mark, a point at which the 100-day SMA is currently trying to complete a bullish crossover. The 50- and 100-day SMAs are promoting a neutralising force to help the pair creep sideways towards the long-term tentative downtrend line, drawn from the 1.0235 peak.

The bearish tone of the Ichimoku lines is indicating negative momentum may soon regain clear dominance in the pair. The short-term oscillators are also transmitting such bearish messages. The MACD is below zero and has prodded a tad over the red trigger line but seems set to return below it, while the RSI weakens in bearish regions. The stochastic oscillator has surrendered its positive charge and is promoting a gloomier outcome.

Alternatively, if the 200-day SMA provides some footing and buyers push over the nearby 50.0% Fibo of 0.9114, the cloud’s lower band at 0.9171 could deliver initial limitations to upside price developments. Subsequently more profound buying interest will be necessary to navigate the price beyond the resistance section from the 38.2% Fibo of 0.9198 until the 50-day SMA at 0.9245. Succeeding, the pair could then meet friction from the blue Kijun-sen line at 0.9273 and the 23.6% Fibo of 0.9302 overhead.

Summarizing, USDCHF seems to be adopting a growing bearish bias. That said, a shift above the cloud and the 0.9472 peak could slightly boost optimism.