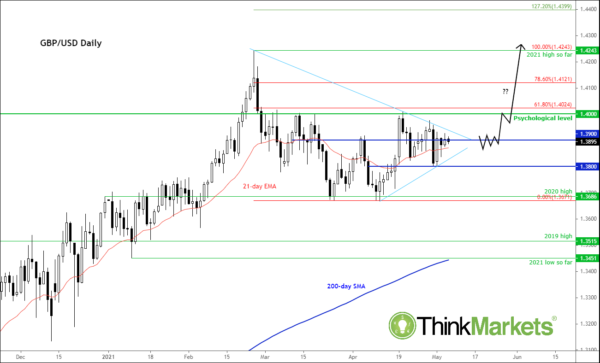 The focus is turning to the Bank of England with the central bank meeting due at 12:00 BST. Investors will be wondering whether Andrew Bailey and his MPC colleagues will start turning more hawkish amid improvement in data and ongoing optimism over the re-opening of the economy.

Sentiment towards UK assets have improved markedly since the end of last year, when a hard Brexit was avoided and after the UK’s decisive action to put the nation into another lockdown caused virus infections and covid-related deaths to fall sharply. The nation has since removed various lockdown measures, while racing ahead in the Covid vaccinations. Investors are hopeful that things will be closer to normal in the UK sooner than many other nations, which should help fuel a strong economic recovery in the months.

Data has also been improving in the UK, which together with rising global inflationary pressures have raised speculation that the Bank of England will need to start thinking about tapering bond purchases and raising interest rates in the not-too-distant future. Last week for example we saw flash manufacturing and services PMIs both climbed above 60.0; retail sales have jumped 5.4% in March and house prices have gone through the roof ahead of the stamp duty holiday expiry at the end of June. House prices rose +2.1% month-over-month according to Nationwide. This is yet another sign of rising inflationary pressures in the economy.

Although CPI and wage inflation in the UK have remained relatively soft, input costs are nonetheless rising as the increases in prices of raw materials are exacerbated by the recent strength in the pound.

The trouble for the cable is that the US economy is improving even more strongly than the UK, and the dollar has found pockets of strength here and there as a result. This has prevented the cable from rising more rapidly. Also hurting the pound has been some mild concerns about another Scottish independence referendum, although it is highly unlikely that the UK government will allow it.

All told, there is less need for emergency stimulus measures from the Bank of England and if the central bank does turn hawkish then the GBP/USD may finally break that key 1.40 hurdle where it has repeatedly found resistance.