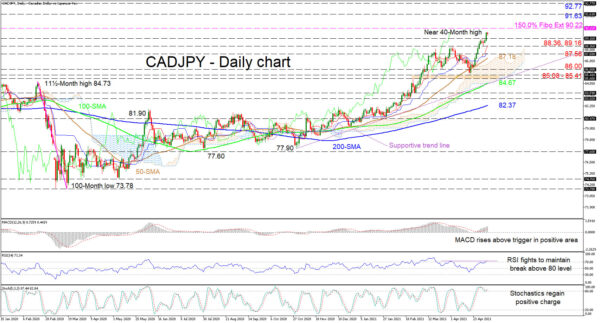 CADJPY appears to be taking a breather around its fresh multi-year high after its recent aggressive rally found traction off the 85.41 level and the Ichimoku cloud’s upper boundary. The soaring simple moving averages (SMAs) are shielding the upwards structure, while the Ichimoku lines are reflecting a pause in bullish sentiment.

The short-term oscillators are signalling that positive momentum may shortly regain the upper hand. The MACD, some distance in the bullish territory, is strengthening above its red trigger line, while the RSI is fighting to sustain its thrust into the overbought section. The stochastic oscillator has reclaimed its bullish charge above the 80 mark and its %K line is navigating higher, promoting growing positive impetus.

To the upside, lifting the multi-year high, buyers could encounter initial resistance from the barrier of 90.22, which happens to be the 150.0% Fibonacci extension of the down leg from 84.73 until 73.78. Successfully surpassing this boundary, the pair may then propel for the 91.63 peak, identified in September 2017, and the 92.77 obstacle from back in December 2015.

If sellers become the frontrunners, they may face early support from the 89.16 barrier and the key trough of 88.36 – where the red Tenkan-sen line also currently resides. Steering lower, some downside friction may emanate from the 87.58 barrier before the bears challenge the 50-day SMA at 87.18 and the cloud’s upper band, lingering beneath. Should a stronger retreat unfold and sink the price into the cloud, support may then evolve around the 86.00 handle.

Summarizing, CADJPY is sustaining a sturdy positive tone above the 88.36 border and the SMAs. A break below the 85.08-85.41 support base would be needed to rock the bullish bias.