GBPUSD Develops Within Symmetrical Triangle Above 1.39 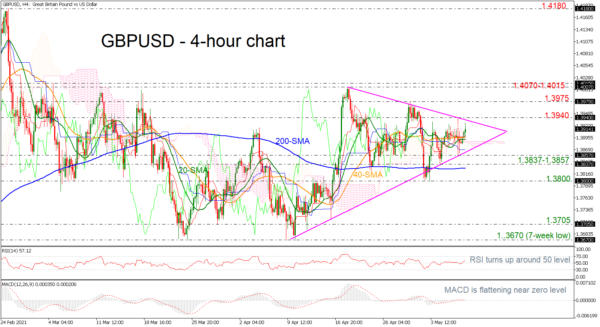 GBPUSD has been developing within a symmetrical triangle following the upside movement from the seven-week low of 1.3670 in the 4-hour chart.

The RSI is gaining momentum in the positive territory, however, the MACD oscillator is moving sideways near the zero level. The 20- and 40-period simple moving averages (SMA) are flattening slightly below the current market price, while the steady 200-period SMA could potentially act as a strong support to sharp downside corrections.

In the case that bulls take the upper hand and send the market above the descending line and the 1.3940 resistance, they could hit the 1.3975 barrier ahead of the 1.4070-1.4015 restrictive zone. A break higher from here would resume the rebound off 1.3670, shifting the short-term outlook to positive.

On the flip side, a decline below the SMAs, the Ichimoku cloud and the ascending line could flirt with the 1.3837-1.3857 support area, before hitting the 200-period SMA at 1.3828. Underneath this barrier, the 1.3800 handle could halt the bearish action, but if the bears continue to drive, the 1.3705 hurdle could next attract attention.

In brief, the cable is trading in a continuation pattern and expectations are for a break to the upside. In the alternative scenario, the price may dip beneath the 200-period SMA to re-activate a bearish tendency.