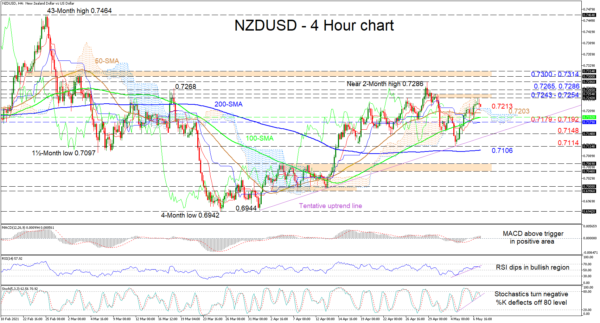 NZDUSD has hit a snag as upside momentum appears to have evaporated, indicating that the pair may struggle to further extend its recent bounce off the uptrend line pulled from the 0.6944 low. The 50- and 200-period simple moving averages (SMAs) are suggesting a more neutral price development towards the ascending line, while the 100-period SMA is backing additional price improvements.

The Ichimoku lines are not transmitting a clear price direction, while the short-term oscillators are signalling that present sentiment may be unable to steer the price higher.

conflicting messages in directional momentum. The MACD, slightly beyond zero, is holding above its red trigger line, while the RSI is weakening in the bullish region. The stochastic oscillator has become increasingly negative and is promoting a deeper price retracement.

To the upside, resistance could originate from the nearby zone of 0.7243-0.7254 before buyers challenge the overhead peaks of 0.7265 and 0.7286, respectively. A successful resumption of the uptrend may require the bulls to recapture the 0.7300-0.7314 buffer zone in order to fuel confidence in the bullish impetus.

If the minor recoil in the price matures below the Ichimoku cloud and the red Tenkan-sen line around 0.7213, early support could arise from the flattening 50-period SMA at 0.7203. Dipping lower, a region from the 100-period SMA at 0.7192 until the blue Kijun-sen line at 0.7179 could impede the price from losing extra ground. The next defence of the gradual climb in price from the 0.6942 trough lies at the short-term uptrend line, somewhere in-line with the 0.7148 barrier. Yet, should sellers break below this diagonal line, the 0.7114 trough and adjacent 200-period SMA at 0.7106 may try to terminate the decline.

Summarizing, NZDUSD’s short-term timeframe is sustaining a neutral-to-bullish bias above the SMAs and the uptrend line. A deeper retraction below the 0.7114 trough may underpin bearish tendencies.