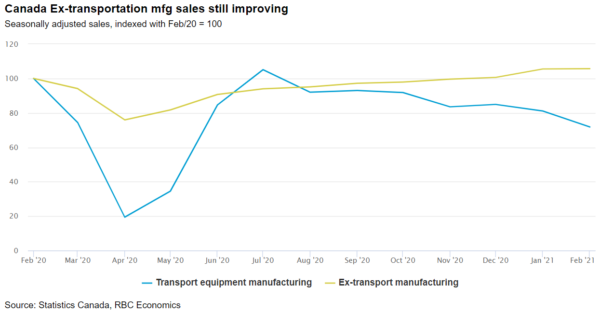 Statistics Canada already provided a preliminary estimate that manufacturing sales bounced back a sizeable 3.5% in March (after a 1.6% February pullback) as curtailments on auto production related to the global semi-conductor shortage eased. Those disruptions pushed finished motor vehicle sales down 22% over January and February, with negative spillovers to other related industries like plastics and rubber production. Capacity pressures are growing with the Canadian manufacturing PMI report for April highlighting lengthening delivery times as a result of port congestion, and rising input costs from shortages of raw materials. Labour shortages, not restricted to the manufacturing sector have also been a long-standing issue that will remain even after the pandemic ends.

Manufacturing hours worked fell 1.1% in April, flagging some downside risk for sales in that month. But the issues in the industrial sector – too much demand, not enough supply of production inputs – continue to contrast sharply with exceptionally weak activity in the travel and hospitality sectors where much more stringent virus containment measures remain in place.

Indeed, the most important near-term economic indicator for those hardest-hit sectors is still the pace of virus spread and vaccination rates. Virus spread looks to be largely slowing for provinces outside of Alberta, Nova Scotia and Manitoba. And the rate of vaccination continues to ramp up significantly, with more than 40% of eligible groups (which now include children 12 and older) having received at least one dose in Canada.