The Weekly Bottom Line: How Far is the U.S. Labor Market from Home? 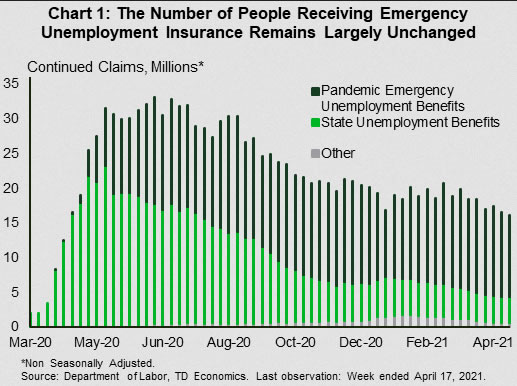 It’s jobs week! This morning, the U.S. Bureau of Labor Statistics surprised the market with the payroll survey reading of only 266 thousand jobs created in April, well below the one million anticipated by forecasters. Net of revisions, employment was down 78 thousand compared to the previous report. The unemployment rate edged up a tenth of a percentage point to 6.1%, while the labor force participation rate increased to 61.7% from 61.5%. Notably, leisure and hospitality sector added 331 thousand jobs – a small consolation to an overall disappointing report.

Today’s report reiterates the fact that the labor market still has a long way to go and the path to full employment is not as straight forward as hoped. Another reminder of this was this week’s weekly jobless claims report, which dropped for the fourth consecutive week even as the number of people receiving pandemic emergency unemployment benefits showed little movement (Chart 1). This could reflect a COVID-induced hesitancy towards returning to work as long as the virus is still spreading, as well as parts of the economy remaining closed.

Emergency unemployment benefits will expire in September and by then, with a large portion of people vaccinated, the health crisis should largely be in the rear-view mirror. This should help to alleviate some of the potential labor supply issues. In the meantime, higher payroll costs appear to be adding to production prices. This week’s ISM reports reiterated the point. While both the manufacturing and service sector indexes are expanding, they slowed in May. At the same time, the price sub-indexes of both industries continued to accelerate, as supply-side bottlenecks interrupted business activity (Chart 2). Surging demand combined with constrained supply could allow businesses to start passing on the added costs to consumers, though this remains to be seen in the consumer price data. In the meantime, the impact of supply chain dislocations is likely to continue.

The Federal Reserve will look past one time jumps in prices, but will be cognizant of the risk of faster price growth becoming imbedded in expectations. While a wage-price spiral is unlikely and the Fed will temporarily look past inflation running above its 2% target, it will not do so forever. As long as the economic recovery picks up as we expect it to, rate increases will occur before the Fed’s median dot suggests (our recent rate forecast calls for the first hike in late 2022).

Market reaction to a change in Fed communication is likely to be felt across asset classes and will have consequences for financial stability. A “sharp rise in interest rates” was the second most cited potential shock noted in the Fed’s Financial Stability Report, which also mentions stretched asset valuations as one of the major vulnerabilities to the financial system.

Canada – The Tug of War Continues

After moving sideways earlier on possible rate hike remarks south of the border, financial markets are closing the week in positive territory. The S&P/TSX composite is following its global peers higher, recording a 1.8% gain in the week (as of writing). Meanwhile, the Canadian dollar continued its uptrend, reaching 82 U.S. cents this week, the highest since the fall of 2017. The loonie has been supported by a confluence of factors, including a broader risk-on tone, a weak USD, and rising commodity prices. To this end, lumber continues to break record highs, with copper following suit this week, reaching US$4.7 per pound.

In terms of economic data, April’s Labour Force Survey (LFS) release took center stage this week (Chart 1). The tug of war between infections and vaccinations continues to dictate Canada’s economic trajectory. Employment tumbled by 207K jobs –worse than consensus expectations for a 162.5K decline. There was little in the way of optimism in the report. Indeed, hours worked fell 2.7% on the month, pointing to a decline in monthly real GDP. Job losses were relatively broad-based, extending to seven of 10 provinces and 11 of 16 industries. Ontario and B.C. saw the steepest declines. Both provinces re-enacted restrictions on the service sector in response to rising cases in April, with Ontario still under a stay-at-home order.