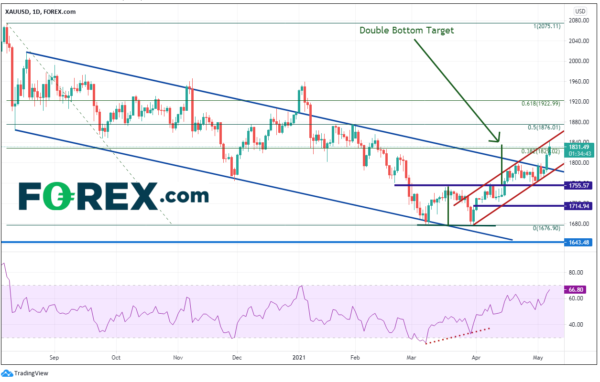 Unless there is a prominent central bank interest rate decision, the second week of a month tends to slow down in terms of economic data.  That is indeed the case this month.  The pace of the re-openings and vaccine numbers will continue to be the headline stories this week however, given the disappointing NFP data on Friday which showed the US economy only added 266,000 jobs in April vs +980,000 expected, traders will be dissecting the print to see what went wrong.  We will also get CPI and PPI from China and the US.  The US Federal Reserve has told us that they are more concerned about the maximizing employment than controlling inflation.  Therefore, they may only peek at this data. And although earnings season is dying down, we do have a few notables to watch!

A break from Central Banks

With the RBA and the BOE behind us, the run of central bank meetings takes a week off.  The results thus far have been mixed.  The Fed, RBA, RBNZ, and BOJ are on hold, while the BOC and the BOE are tapering, sort of.  And on Friday, the ECB’s Kazaks said that the ECB could slow bond purchases at the June meeting.  However, note that the ECB increased purchases at the March meeting, so they may just be returning to the previous amount.   For those who can’t handle this week’s central bank hiatus, the Bank of Mexico will meet on Thursday afternoon, though they are expected to leave rates unchanged as inflation slowly increases and vaccine distribution continues.  Roughly 15% of population has been vaccinated.

Speaking of the coronavirus…….

In India and Brazil, the virus is still out of control.  India alone is racking up over 400,0000 A DAY! But help is on the way.  Countries with a surplus of vaccines, such as the US and UK, are sending medical supplies, ventilators, and vaccines, as India tries to reign in the virus. Japan has just extended their restrictions thru the end of May.  Remember that the Summer Olympics are approaching quickly, and Tokyo is still under a State of Emergency.  Singapore has also placed the country under restrictions for 3 weeks, limiting gatherings to no more than 5 people.  US President Joe Biden has said that he would waive the Intellectual Property rights so other companies can make the vaccine.  However, the problem seems to be getting the ingredients and manufacturing the vaccine, not necessarily on who makes it.  On the other side of the coin, countries such as the US, UK, Australia, and New Zealand are open for business. In the US, there is currently a surplus of vaccines as it seems that everyone who wants it, can get it.  There are even states giving incentives to people for getting the vaccine, such as free beer, free sporting event tickets, and some even contemplating giving money!

However, if traders look at the April jobs data, they may note a possible problem with these incentives

How can so many economists be so wrong? As we wrote about in the NFP recap: Whoa, big miss! What does this mean for the Fed?, the number of jobs added to the US economy was 266,000.  The average estimate of economists was +980,000!  In addition, the net revision of the February and March numbers was lower, which makes April’s figures even worse.  The re-openings are happening, right now.  The service industry is hiring, including restaurants, hotels, and seasonal hospitality.  However, after the disappointing Non-farm payroll figures were released, the US Chamber of Commerce of called for ending the extra unemployment benefits of $300/week, with Chief Policy Officer Neil Bradley noting that “the disappointing jobs report makes it clear that paying people not to work is dampening what should be a stronger jobs market”.  Canada’s Employment Change disappointed as well.  The Canadian economy  lost 207,100 jobs during April vs a loss of 175,000 expected.  The unemployment rate moved higher as well, from 7.5% to 8.1%.  However, much of the country was on lockdown during the month.  The employment results may cause the BOC to put the brakes on tapering for a while.

Earnings season is slowing down but….

This week could be exciting for earnings, as a few of the newbies release, including RBLX, DASH, and COIN.  Traders will also be watching to see if MAR, ABNB and DIS earnings have picked up after the coronavirus.  All the notable releases this week are as follows:

As mentioned above,  the second week of the month tends to be a light economic data week.   (Did anyone else notice last week that the European data seemed to be better than expected while the US data seemed to be worse than expected? ) However, there are some notable data releases that traders will be watching this week, including CPI and PPI from both China and the US, and Germany’s final inflation data, for April.  May sentiment indicators from Germany and Australia will also be released. In addition, the UK will release its preliminary Q1 GDP and the week will wrap up with US Retail Sales.

There has been a lot of talk lately about the strength of commodities, with some making all-time new highs.  However, Gold (XAU/USD) has been left out of the conversation for the most part, because its move from 1676 to 1843 has been tiny when comparing it to other commodity returns. Gold joined the conversation this week after weary traders started buying the precious metal on fears of a stock market correction and a terribly weak US Dollar.  Gold was in a longer-term downward sloping channel dating back to August 2020 until Thursday, when price broke above the top downward sloping trendline (blue). It had formed a double bottom during March, and has been in a shorter-term, upward sloping channel since.  It broke above the neckline of the double bottom on April 15th and reached its target today near 1835. However, it ran into resistance at the top of the shorter-term channel near 1843.5.  The 50% retracement level and the 61.8% Fibonacci retracement levels from the same timeframe provide the next levels of resistance at 1876 and 1923, respectively.  A confluence of support is at the bottom trendline of the short-term channel and the top trendline of the longer-term channel near 1788, ahead of the breakout of the double bottom at 1755.5.

Re-openings, vaccines, and the on-going coronavirus should give direction to the markets this week.  In addition, with the weak NFP data on Friday (more stimulus), stocks may still feel safe to move higher.  But with a weak US Dollar, Gold could continue higher as well.  Watch inflation data from China and the US this, as well as earnings from some of the new kids on the block.

If you are a mother, Happy Mother’s Day!  Thank you for all hard work you do for your children!