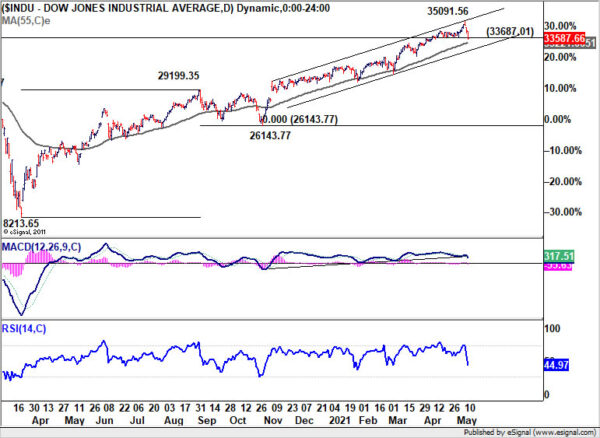 Extremely higher volatility was seen in the markets overnight, with the steep decline in stocks and rally in yields. Bitcoin also had a free fall. Negative sentiments continue in Asia with major indexes trading in deep red. In the currency markets, Australia and New Zealand Dollars are under most selling pressure, followed by Yen. Dollar did extended the near term recovery slightly, but upside momentum is relatively weak. Sterling and Canadian Dollar are still the strongest for the week.

Technically, we’d continue pay attention to Dollar pairs. Levels to watch include 1.1985 support in EUR/USD, 1.4008 support in GBP/USD, 0.7673 support in AUD/USD, 0.9163 resistance in USD/CHF, and 1.2265 resistance in USD/CAD. Dollar will need to break through these levels to confirm that it has bottomed for the near term. Otherwise, selling could come back any time.

US stocks tumbled sharply overnight after the big upside surprise in consumer inflation reading. Technically, while the pull back in stocks was deep, there is no threat to the up trend yet. However, the simultaneous strong rise is 10-year yield is worth a note. Correction in stocks could extend much deeper depending on the power of 10-year yield’s next move, after break through 1.765 resistance level.

The strong of yesterday’s rally in 10-year yield suggests that it could finally be ready to resume the medium term up trend. Focus would now be on 1.765 resistance for the coming trading days. Firm break there will extend the rise from 0.504. Next target is the resistance zone between 1.971 and 61.8% retracement of 3.248 to 0.398 at 2.159. For now, we’d expect strong resistance from there to limit upside. If that’s the case, we won’t expect drastic reversal in stocks. However, it would be another story if this 1.97/2.16 zone is taken out firmly.

In an article to the Daily Mail, BoE chief economist Andy Haldane said, “with the economy bouncing back, and with inflation risks on the rise, now is the time to start tightening the tap to avoid the risk of a future inflationary flood.”. He voted to “begin throttling back the degree of support provided to the economy” at last week’s MPC meeting. And he emphasized that’s just “gently taking our foot off the accelerator”, rather than, “slamming on the brakes”.

“By the end of this year, inflation is likely to be above its 2 per cent target, largely due to the temporary effects of higher energy prices,” he explained. “At that point, the UK economy is likely to be growing rapidly above its potential. This momentum in the economy, if sustained, will put persistent upward pressure on prices, risking a more protracted – and damaging – period of above-target inflation. This is not a risk that can be left to linger if the inflation genie is not, once again, to escape us.”

BoJ Kuroda: Important to respond to pandemic’s impact for now

BoJ Governor Haruhiko Kuroda told the parliament today that “economic activity will remain below pre-pandemic levels for the time being.” Also, “risks to the economic outlook are skewed to the downside.” Nevertheless, the economy as a whole is picking up momentum thanks to robust exports and productions.

“We’ll take into account the effects and cost of our policy, and aim to achieve moderate inflation accompanied by growth in corporate profits, jobs and wages,” he said. “It’s important to respond to the pandemic’s impact for the time being” by maintaining the central bank’s ultra-loose monetary policy.

Bitcoin dives on Tesla halt, correction to extend to 41k

Bitcoin was in free fall overnight after Tesla said it has suspended vehicle purchases using the crypto-currency. “We are concerned about rapidly increasing use of fossil fuels for bitcoin mining and transactions, especially coal, which has the worst emissions of any fuel,” Chief executive Elon Musk tweeted. “Cryptocurrency is a good idea on many levels and we believe it has a promising future, but this cannot come at great cost to the environment.”

The sharp decline wasn’t much a surprise technically. Bitcoin is now in it’s third leg of the corrective pattern from 64828. Minimum target of 47112 support was actually met already. Though, there is no sign of bottoming and further fall should be seen. The corrective pattern might complete only after testing 38.2% retracement of 4000 to 64828 at 41591, which is close to the top of prior range of 20283/41964.

Japan bank lending rose 4.8% yoy in April. Current account surplus narrowed to JPY 1.7T in March. UK RICS house price balance rose to 75 in April. Looking ahead, US jobless claims and PPI are the main focuses of the day.