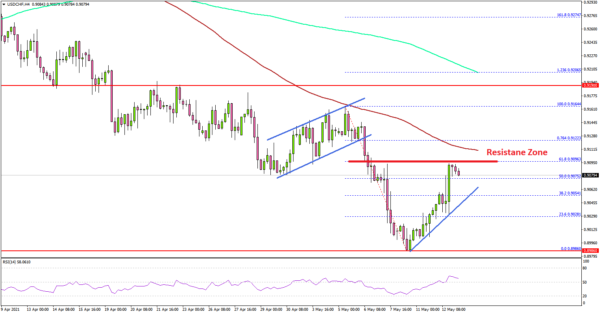 In the past few days, the US Dollar started a steady decline from well above 0.9300 against the Swiss Franc. USD/CHF declined below 0.9200, but it remained supported near 0.8985.

Fundamentally, the US Consumer Price Index for April 2021 was released yesterday by the US Bureau of Labor Statistics. The market was looking for an increase of 3.6% compared with the same month a year ago.

The actual result was above the market forecast, as the US Consumer Price Index climbed 4.2% in April 2021. The monthly change was +0.8%, which was above the forecast of 0.2%.

Overall, USD/CHF eyes a steady recovery above the 0.9120 and 0.9150 levels. Besides, EUR/USD and GBP/USD saw a few bearish moves after the release.