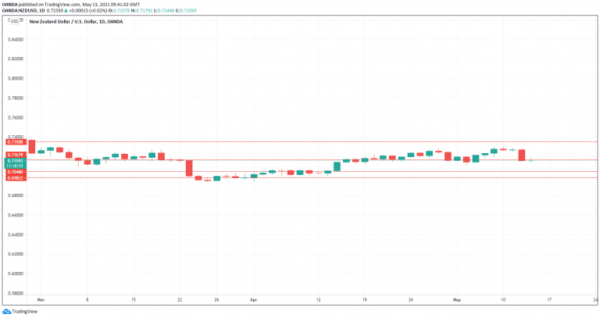 It was Black Wednesday for the New Zealand dollar, which plunged 1.57%, its worst one-day showing since Mach 23rd. The culprit behind the sharp downturn was the US inflation report for April, which was much higher than expected. Headline CPI jumped 4.2% year-on-year, and on a monthly basis, core CPI rose 0.9%, its highest level since 1982.

Analysts had predicted much lower inflation, and this resulted in global equities falling sharply on Wednesday. The inflation report also led to the US dollar posting broad gains, especially against risk currencies like the New Zealand and Australian dollars. This is due to increased speculation that the Federal Reserve may consider accelerating its timeline for tapering its QE programme of USD120 billion, which has supported the US economy since the Covid outbreak in March 2020. Such a tightening of policy would be bullish for the US dollar.

Will the Fed respond to the higher inflation report, or dismiss it as a “one-off” spike in inflation? On Tuesday, prior to the CPI release, Fed Governor Lael Brainard said that inflation risks are a “transitory surge” and urged the Fed to remain patient and continue its ultra-dovish monetary policy. Brainard pointed to the weak nonfarm payrolls report last week as an indication that the US recovery still has a ways to go, saying that, “today, by any measure, employment remains far from our goals.”

The sharp losses in the equity markets are a strong indication that investors are concerned that higher inflation will be prolonged and is not a temporary occurrence, as the Fed insists. If upcoming inflation reports show that higher inflation appears to be sustainable, the Fed may have to backtrack and take a hard look at tapering QE.