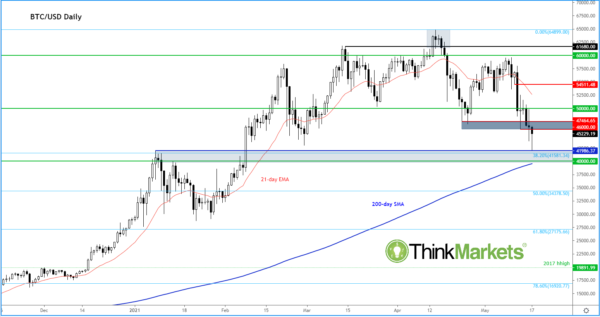 Once upon a time, traders used to watch Donald Trump’s twitter handle like hawks. Now it is Elon Musk’s turn – especially for crypto traders. After Musk replied to a tweet implying that Tesla had sold or is selling its holding of Bitcoin, the digital currency tanked. BTC/USD fell to a low of almost $42K before it bounced sharply on yet another Tweet from Musk, in which he clarified that Tesla had not sold any of its Bitcoin holdings (yet?). A few of his other tweets confirmed what he had said previously i.e. that he’s looking into other cryptocurrencies that use less than 1% of Bitcoin’s energy and transaction. But the damage may already be done – and not just for Bitcoin.

Tesla’s decision to suspend Bitcoin payments on environmental concerns is a hammer blow for the digital currency and there is a risk that other big companies who have adopted Bitcoin may follow suit given how sensitive the issue of carbon foot-print has become.

Although Musk has said Tesla intends to use Bitcoin for transactions again as soon as mining turns to more sustainable energy, this won’t happen any time soon. It is very difficult for miners of the digital currency that use fossil fuels and coal, especially in certain parts of the world such as China, to switch to renewal energy supply.

It is not necessarily bad news for all other cryptos, as the search for alternatives continue by Tesla.

But given how strong Bitcoin’s correlation has become with some of the other risk assets, including technology stocks, the digital currency’s short-term lower highs may signal that risk appetite on Wall Street may also be in transition.

Meanwhile from a technical point of view, Bitcoin has tested and bounced from the upper end of support in the $40K to $42K area, which was previously resistance. So, it could be that Bitcoin has already formed a low. But until it now starts to print higher highs, the bears might decide to step back in as prices test resistance….