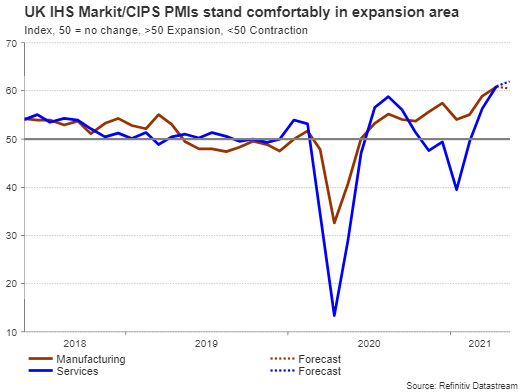 British Chancellor Rishi Sunak expressed in an exclusive interview last week that post-Brexit Britain can look forward to a flourishing future as hopes and opportunities are rising again after a harsh start to the year. Following a robust employment report, April’s CPI inflation figures on Wednesday (06:00 GMT) and retail sales and flash Markit/CIPS PMI figures for the same month on Friday (06:00 GMT) could add further credence to the bullish economic picture. With the Bank of England (BoE) having gently taken its foot off the accelerator, another encouraging data set could only build confidence in the pound, though some caution is still warranted as the pandemic rages on.

Boris Johnson kept his word and pushed ahead with plans of allowing indoor dining at bars and restaurants this week despite the fast-transmitting Indian variant increasingly infecting some regions in the UK the government is optimistic that it could send the virus into retreat as two-thirds of the adult population have been vaccinated with a first dose of a Covid-19 jab, and infection cases and deaths have diminished to the lowest level since the pandemic started. That said, the deadly wave of infections in India is something that cannot be ignored, and the government may not fully reopen economy unless the circulating virus finally shows convincing signs of abating.

Nevertheless, a rapid recovery in the second quarter seems to be highly priced in after a quarterly contraction of 1.5% in the first three months of the year. Although monthly retail sales readings could lose pace in April, the annual gauge is expected to skyrocket by 36.8% from 7.2% previously on Wednesday, with the core measure, which excludes fuel, also excelling by 31.7%. On Friday, flash Markit/CIPS PMI figures for the same month may further imply growth momentum going into the second quarter as analysts project the services PMI index to jump to 62 from 61 in March, offsetting the slight pullback in the manufacturing PMI and stretching the composite PMI from 60.7 to 62.0.

While a V-shaped recovery has been long anticipated, speculations have been persistently rising globally for some time that a period of above-target inflation could derail the path of expansion, forcing central banks to rein in the amount of stimulus they have provided to mitigate the pandemic’s economic damages.The Bank of England’s governor has so far been echoing the Fed’s statement, saying that inflation could be “a bit bumpy this year as base effects come in and out”. However, his words put him at odds with the Bank’s chief economist Andy Haldane, who cautioned instead that “this momentum in the economy, if sustained, will put persistent upward pressure on prices, risking a more protracted – and damaging – period of above-target inflation”.

Haldane will step down later this year, therefore his remarks cannot be blindly considered as policy signals, though the difference of opinion between the key policymakers and the slowdown in bond purchases announced by the Bank at the start of the month suggests that inflation is becoming a challenging topic for the central bank and could drift policymakers deeper in thoughts if the sell-off in the British bond market continues and supply bottlenecks stay intact. Complains of labour shortages may also lead to higher prices if businesses offer higher wages to attract new employees.

For now, CPI inflation readings may not raise alarms on Wednesday although the figures are expected to double in April. Particularly the headline CPI is projected to bounce from 0.7% to 1.4% and the monthly print is expected to climb from 0.3% to 0.6%. Producer prices could also jump significantly.

As regards the market reaction, the data may reflect something that is already known. Therefore, unless the figures deviate significantly from forecasts, the pound may face modest movements. Even if that is the case, upside shifts, however, are more likely than downside ones as stronger inflation and business figures are positive for currencies, especially as the case of monetary tightening starts to flash on the horizon.

The technical picture for pound/dollar also switched back to bullish from neutral following the break above February’s closing price of 1.4140 today. If buyers clear the 1.4245 peak too, the door will open for the 2018 key resistance region of 1.4344

Otherwise, if the UK data disappoint as the US ones did recently, pushing the price back below 1.4140, the 20-day simple moving average (SMA) could come to the rescue near 1.4000. Lower, the 50-day SMA and the former support region of 1.3850 – 1.3800 may next attempt to pause downside corrections.