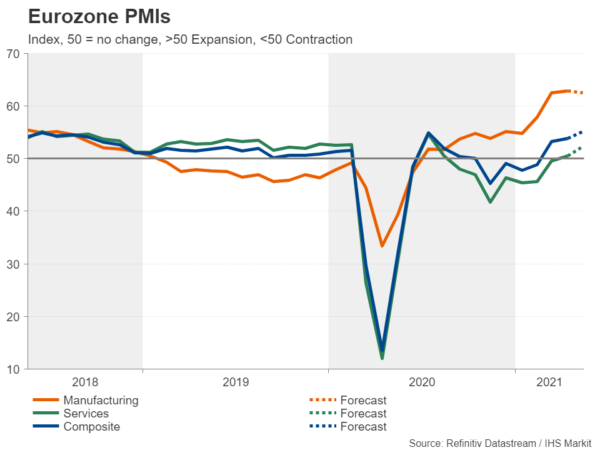 After long winter shutdowns, virus-stricken Eurozone countries are finally emerging out of lockdown and the vaccination drive is accelerating. The further lifting of virus restrictions in May likely boosted economic activity across the region and this is expected to be reflected in the flash PMIs due on Friday (08:00 GMT). The euro is riding high on the back of the rosier economic outlook. But that’s not the only thing giving the single currency a leg up. The European Central Bank’s half-hearted commitment to keeping yields low and eagerness to scale down some of the emergency stimulus is amplifying the bullish case for the euro.

Eurozone recovery back on track

Since the autumn, the manufacturing sector has been the main driving force of the Eurozone economy but that now seems to be changing as the rebound in services is quickening, with a little help from warmer weather and vaccines. After a bungled start, Europe’s vaccination campaign is finally gathering pace and although it is still behind the current vaccine leaders, the US and UK, investors are hopeful that once the current round of virus restrictions have been lifted, there won’t be another return to lockdowns.

Activity in the services sector had already shown signs of life in April and the PMI is expected to have jumped from 50.5 to 52.3 in May’s flash reading. However, after surging to a record high in April, the manufacturing PMI is forecast to moderate slightly to 62.5 in May. The composite PMI, which measures overall activity, is expected to rise to a post-pandemic high of 55.1.

More upside in store for the euro?

The fast turnaround in the Eurozone’s economic fortunes has re-energized euro bulls after a dreadful first quarter. Euro/dollar has hit 4½-month highs this week, skyrocketing above the $1.22 handle. Having successfully broken above the 78.6% Fibonacci retracement of the January-March downleg, the next target for the bulls is the January peak of $1.2349, after which point, the 123.6% Fibonacci extension of $1.2502 would come into focus.

A strong set of PMIs on Friday could easily add more positive momentum for the euro and there’s a good chance this trend will continue in the coming weeks. However, June could be a trickier time for euro/dollar as both the European Central Bank and Federal Reserve might provide some clues as to whether their respective bond buying plans will continue at their current pace.

Yields are soaring, ECB’s next move will be crucial

Expectations that the ECB could signal some form of winding down of its Pandemic Emergency Purchase Programme (PEPP) at the June meeting has sent Eurozone government bond yields soaring. The 10-year German bund yield has shot up to two-year highs and is on track to turn positive. In contrast, the 10-year Treasury yield has kept to its sideways range even after the latest shockingly strong US CPI data.

Unless ECB policymakers reaffirm their pledge to front load bond purchases to fend off a further explosion higher in Eurozone yields, the euro is likely to remain on the front foot against the US dollar, especially if the Fed maintains its ultra-dovish stance through the summer.