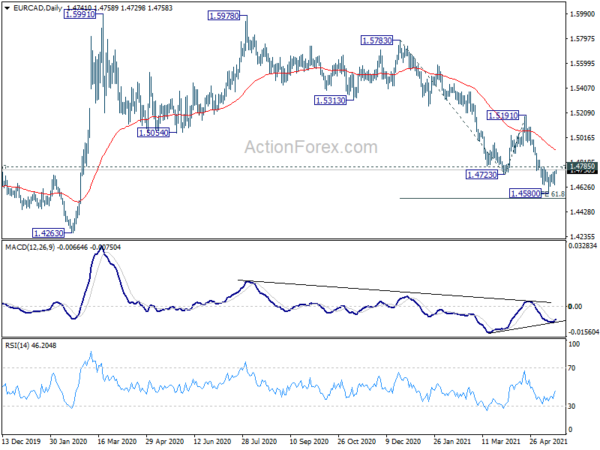 Technically, Canadian crosses could be worth a note today as the Loonie has lost much upside momentum recently. EUR/CAD recovered after hitting 1.4580. Break of 1.4785 resistance will suggest short term bottoming and bring stronger rebound back to 55 day EMA at 1.4917. GBP/CAD is also eyeing 1.7176 support turned resistance and firm break there should confirm short term bottoming too. Nevertheless, the developments could very much depend on the Canadian inflation data, and the reactions today.

Australia Westpac-Melbourne Institute consumer sentiment dropped -4.8% mom to 113.1 in May, down from 118.8. Still, it’s the second highest print for the index since April 2010. Westpac said, “The fall may also represent some disappointment in the Federal Budget as a very generous Budget was still unable to exceed the exuberant expectations of the community.”

On RBA policy, Westpac expects the board to extend QE to a further AUD 100B starting in September, and to switch the target bond in the yield curve control from April 2024 to November 2024. It said, “this view is based on the expectation that the Board will be committed to monetary stimulus (reducing QE or restricting YCC to the April bond are akin to tightening policy) for the remainder of 2021.”

“Lower lake levels in the South Island have driven up wholesale prices for electricity generation, while an unexpected fall in production at the Pohokura gas field has seen gas supply prices also increase,” business prices delivery manager Bryan Downes said. “The quarterly price change is the largest since 2018 but is nowhere near the magnitude seen in the 2008 power crisis.”

US, Canada and Mexico commit to prohibit import of forced labor produced goods

Trade ministers from the US, Canada and Mexico held “robust” talks on the new U.S.-Mexico-Canada trade agreement, which took effect last July. In a joint statement, they said, “the USMCA commits us to a robust and inclusive North American economy that serves as a model globally for competitiveness, while prioritizing the interests of workers and underserved communities.”

Additionally, the statement noted, “the United States, Mexico, and Canada discussed our shared obligation to ensure the Agreement’s prohibition of the importation of goods produced by forced labor and recommitted to working closely to promote a fair, rules-based international trading system where products made with forced labor do not enter the trading system.”

Dollar’s selloff continued overnight as focus now turns to minutes of April 27-28 FOMC meeting. While markets were a bit nervous on much stronger than expected consumer inflation readings, Fed officials were in unison in toning down the threat. Current jump in price is generally viewed as transitory by the policymakers. On the other hand, recent data like non-farm payrolls and retail sales argue that the recovery might be more vulnerable than it looks. The minutes would reiterate that Fed is still far from even considering tapering nor interest rate normalization.

Dollar index resumed the fall from 93.43 this week and breaks 90 handle. It’s on track to retest 89.20 low. At this point, it’s rather unsure if such decline is the second leg of the consolidation pattern from 89.20, or it’s resuming th