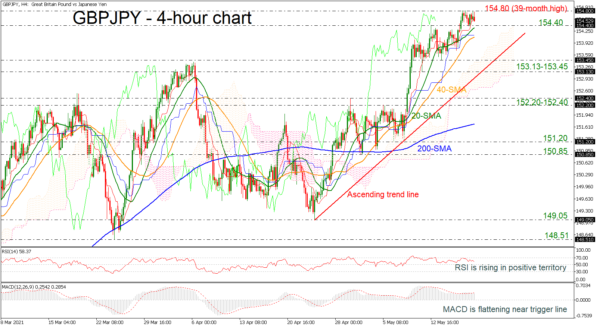 GBPJPY came close to breaking the 39-month high of 154.80, in the previous sessions, but is still fluctuating sideways. According to the RSI, the market could maintain a weak momentum in the short-term as the indicator is flattening above its neutral threshold of 50, while the MACD is flattening near its trigger line in the bullish area.

A reversal to the downside, however, could find immediate support at 154.40, while slightly lower the 20- and 40-period simple moving averages (SMAs) around 154.10-154.35 could halt bearish movements. If the latter fail to halt bearish movements, the next target could be the 153.13-153.45 support zone, below the ascending trend line.

Turning to the medium-term trading, the outlook has been positive over the past month and only a decisive close below the uptrend line could turn the bias to bearish.