Markets just got their first acknowledgement by the Fed that it may soon need to begin discussions on tapering. However, further clarification is unlikely to come before the next FOMC meeting in June so as we head into a quiet data week, trading might get even choppier than it has been recently as investors search for more clues on inflation. One such clue will be the latest PCE inflation numbers out of the United States. Otherwise, the only other highlight next week is the Reserve Bank of New Zealand’s policy meeting.

There were two key points to draw from the Fed minutes this week. The first is that some FOMC members are getting a bit anxious about how much longer they will have to wait before a debate can start on adjusting the pace of asset purchases. The second is that the Fed is keeping an eye on whether all the factors pushing up inflation right now turn out to be transitory.

The latter could not only determine how soon the Fed begins winding down its humungous QE programme but how aggressively it does so. However, for the time being, the Fed is focusing on the rebound in the labour market and will almost certainly overlook any short-term jumps in inflation.

Nevertheless, next week’s PCE price data will be watched with some apprehension as investors continue to fear that the Fed will be forced to move sooner rather than later on tapering. The core PCE price index is out on Friday and the expectation is for a print of 2.4% y/y in April, which would be the highest since 2007. Personal income and spending figures will be released alongside the PCE price indices. Personal income likely fell back by 14.5% m/m in April after March was boosted by the stimulus payments. Personal consumption is forecast to have grown by 0.6% m/m. 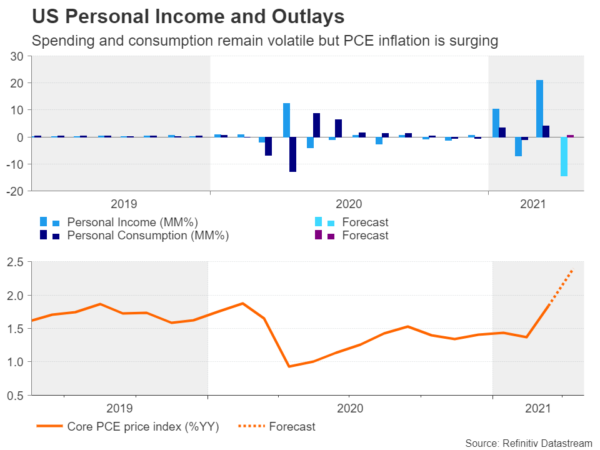 Ahead of the PCE report, housing indicators might attract some attention on Tuesday (new home sales) and Thursday (pending home sales). The consumer confidence index is also out on Tuesday and on Thursday, durable goods orders and the second estimate of Q1 GDP will be making the rounds too.

Any upside surprises in the upcoming data could nudge up Treasury yields. But after the revelations of the April minutes failed to break the US dollar’s downtrend, some stabilization in the currency is probably the best dollar bulls could hope for.

RBNZ: on hold for now but pressure building to exit QE

After a few bumps on the road, New Zealand’s recovery from the Covid crisis is now well underway and the country could even be the first among advanced nations to make a full rebound. But that success is not because of a high vaccination rate – New Zealand’s rollout has been incredibly slow – but down to an effective containment policy.

Although a snail’s pace vaccine rollout poses a certain risk to the outlook, especially as new virus variants keep emerging, and could delay the opening of the country’s borders, investors are nonetheless betting that the Reserve Bank of New Zealand will start raising rates in the second half of 2022.

However, when policymakers meet on Wednesday, no change is expected in policy and the RBNZ will probably strike a dovish tone, reiterating that it won’t mind if inflation temporarily overshoots the central bank’s target. But policymakers will need to tread more carefully when it comes to commenting on the large-scale asset purchase programme (LSAP). The stronger performance of the economy has meant that the government has had to borrow less, reducing the availability of new issuance and taking the RBNZ closer to exceeding the 60% limit of government bonds it can hold. 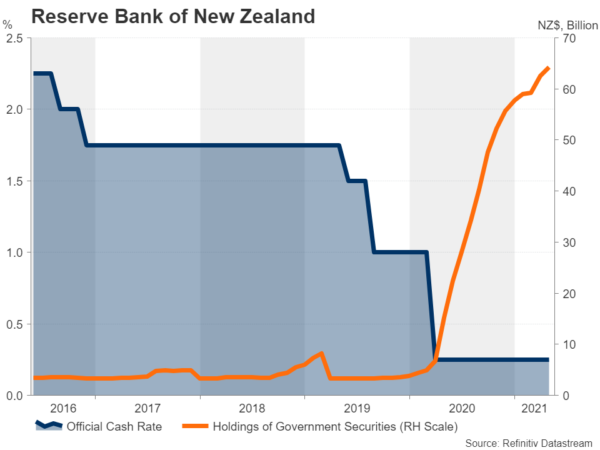 This raises the prospect that the RBNZ could soon have no option but to wind down its LSAP, although this is the last thing the Bank would probably want to do at this point as bond yields globally are facing renewed upward pressure. Still, any hints that slowing the pace of bond purchases was discussed would likely be met by a surge in the New Zealand dollar. Ahead of the RBNZ policy meeting, retail sales figures for the first quarter will be monitored by the kiwi on Monday.

Staying in the region, capital expenditure estimates for the first quarter are due out of Australia on Thursday. The capex reading is a precursor to the GDP data the following week. However, with the RBA not anticipated to change course anytime soon, Fed taper speculation and fluctuations in commodity prices are the main drivers for the aussie right now.

No news may be good news for the euro

In Europe, it will be a fairly quiet week. But this might be a good thing for the euro as the currency might just keep climbing against the dollar in the absence of any breaking headlines. Rising Eurozone bond yields have been assisting the euro in its ascent so unless there was an unexpected intervention by the ECB, verbally or otherwise, that trend could continue, at least until the next policy meeting on June 10. 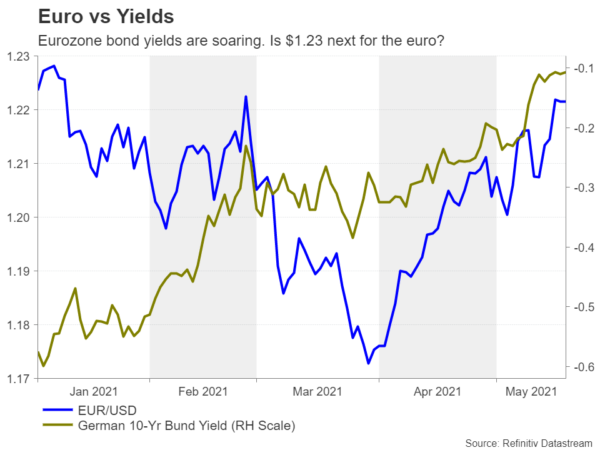 Things might heat up slightly, though, by the end of the week, as the Eurozone economic sentiment indicator is out on Friday as well as revised French and German GDP estimates for the first quarter.

Across the channel, there are no major releases on the agenda, but investors will be watching how quickly the Indian Covid variant is spreading across the UK as this may push back the date at which the final set of virus restrictions can be lifted, potentially hurting the pound.