RBNZ Unlikely to Announce Any Policy Shifts; Focus on Any Tapering Hints

The Reserve Bank of New Zealand will be the last central bank to announce its policy decision this month on Wednesday at 02:00 GMT, with a press conference following the rate statement. The Bank is expected to let the current monetary settings to do the work towards its objectives for now as borders remain closed to most international visitors and the vaccine rollout is incomplete at the current phase. However, recent data releases have pointed to a stronger economic growth in the first quarter, and some optimism could be telegraphed, though with no tapering promises.

Shutting borders may not be a sustainable solution

New Zealand has cut itself off the rest of the world, shutting its borders to protect its citizens from imported infection cases and hence allowing its citizens to live an almost pre-pandemic life under a supper accommodative monetary and fiscal policy. Its virus management has been a starkly successful story so far as covid cases have been rising at double-digit numbers for more than a year now. However, whether this could be a sustainable solution remains to be seen as tourism is an important contributor to New Zealand’s economic growth and borders cannot stay closed forever. The problem is that only a nearly 7.0% of the adult population have got the first dose of vaccine, and should the government lift its travel bans, a new wave of infections could hit the economy as the virus keeps circulating across the globe.

Hence, some time may be needed for the government to raise confidence in vaccines in the coming months and boost its rollout program before reopening its economy to foreign visitors, and during this period, current monetary settings will likely be appropriate to finance consumers and businesses.

Upgrade in quarterly economic projections expected, but no policy shifts

Against the cloudy virus background, policymakers may welcome positive economic developments. Employment rose for the second consecutive quarter in the first three months of the year, pushing the unemployment rate lower to 4.7% and further below the pandemic highs. Upside pressures were also noticed in inflation measures in the same period, with the headline CPI figure making a soft U-turn to peak at 1.5% y/y during the same period and to the highest since Q2 2020.

Probably supply bottlenecks and shortages of raw materials combined with improving demand forces could drive inflation gauges above the central bank’s midpoint target of 2.0% in the coming quarters. 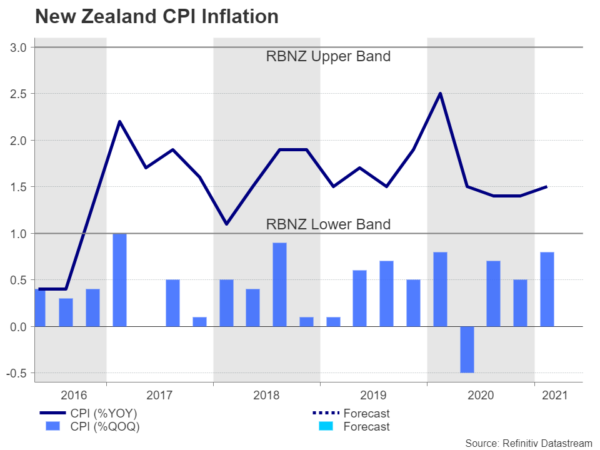 That said, the Bank is not solely focusing on its price mandate, but employment has a big part of its policy-decision making too. Therefore, unless sufficient progress is made on the unemployment rate, the central bank may not hike interest rates. Of course, unlike the Fed, the RBNZ could become less patient if the ultra-low interest rates continue to add fuel to the booming housing prices, which remain elevated near record highs.

Still, the sell-off in bond markets, which keep the 10-year yield near two-year highs, could indirectly add upside pressure to borrowing costs. Potential restrictions on lending conditions proposed in the semi-annual Financial Stability report and the cut of tax incentives could also be alternative tools to bring some balance in the housing market.

As regards its asset purchases program, no changes are expected to take place in the Large Scale Asset Purchase program of NZ$100 billion and the Funding for lending programs. Although policymakers could upgrade their quarterly economic forecasts because of the global growth improvements and the vaccination progress, tapering actions could be considered premature at the current stage as the uncertainty around the new covid variants and the bond sell-off continues to weigh on business plans and consumption.

Challenges, however, could emerge as the reduced bond issuance from the Treasury could add downside pressure to the RBNZ’s purchases and restrict it from buying over 60% of government debt required. Moreover, as the global inflation fear factor makes central bankers more anxious and increases divisions between them, investors will seek any clues on tapering thinking. Note that tapering must precede rate hike actions currently priced for the second half of 2023 for RBNZ. Therefore, the Bank is expected to cut the pace of its bond purchases before that date.

Turning to FX markets, the kiwi has been quite stable against the US dollar over the past few weeks, unable to breach the 0.7300 level on the upside, but also resilient above the 50-day simple moving average and the 0.7140 support area. While the RBNZ is not expected to change course at this week’s policy meeting, any concerns about the path of inflation and thoughts of cutting the pace of bond purchases could see the pair bouncing above the symmetrical triangle and the 0.7300 barrier. In this case, the door would open for the longer-term restrictive line and February’s peak of 0.7463.

Alternatively, if the Bank uses a more dovish tone, hinting that there is still some way to go till it achieves its price and employment objectives, the spotlight will turn back to the triangle’s lower trendline at 0.7140 and the 50-day SMA at 0.7140. A violation at this point could produce a sharper decline towards the previous support zone of 0.7000 – 0.6941.