The euro is showing limited movement on Wednesday. In the North American session, EUR/USD is trading at 1.2236, down 0.13% on the day. There are no eurozone events on the calendar, so we can expect the pair to remain calm during the day.

On Thursday, Germany releases GfK Consumer Climate, an important gauge of consumer confidence. The index has failed to post a gain in over a year, and consumers remain pessimistic about economic conditions, even though the economy is expected to rebound in the coming months, as the vaccine rollout continues and some German states reopen the economy. In April, Consumer Climate fell to -8.8, and the forecast for May stands at -5.3.

The prolonged weakness in consumer confidence is a sharp contrast to business confidence, as companies remain optimistic about economic conditions. German Ifo Business Climate rose to 99.2 in May, its highest level since April 2019.

Investors will be keeping a close eye on upcoming US releases, which could have a significant effect on the direction of EUR/USD. On Thursday, we’ll get a look at Preliminary GDP for the first quarter. The initial estimate came in at 6.4%, and the consensus for the second estimate has been upwardly revised to 6.5%. Durable Goods will be released at the same time. The indicator is expected to slow to 0.7% in April, down from 1.0%.

On the inflation front, Core PCE Price Index, the Federal Reserve’s preferred inflation gauge, will be released on Friday. The index is expected to rise to 0.6% in April, up from 0.4%. With the market still nervous about higher inflation, despite Fed assurances, a higher reading than the consensus could stir up investor jitters and boost the US dollar. 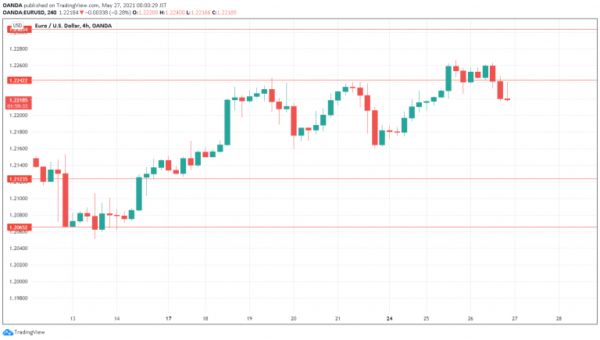