The Australian dollar is showing little movement on Thursday. In the North American session, AUD/USD is trading at 0.7739, down 0.01% on the day.

It has been a good week for Australian releases. Earlier in the day, private new capital expenditure rose by 6.3% in the first quarter, pointing to renewed strength in business spending on buildings and equipment. The indicator has now posted back-to-back gains after seven straight declines.

There was encouraging news from the construction sector on Tuesday. Construction Work Done had sputtered, racking 10 straight losing quarters. The indicator finally burst through in Q1, posting a strong gain of 2.4%, above the consensus of 2.2%.

Despite these solid releases, the response of the Australian dollar has been muted. Since plunging by 1.49% on May 12, AUD/USD has been characterized by choppy movement, unable to sustain any movement in either direction. The Aussie also ignored a narrow miss in the US GDP report. The second estimate GDP for Q1 came in at a robust 6.4%, confirming the initial estimate. The reading was shy of the forecast of 6.5%.

On Friday, investors will also closely monitoring Core PCE Price Index for April, which is the Federal Reserve’s preferred inflation gauge. PCE is expected to rise to 2.9% YoY, up from 1.8% in the previous release. With the market still nervous about higher inflation, despite Fed assurances, a higher reading than the consensus could stir up investor jitters and boost the US dollar.

The market continues to carefully monitor comments from Fed members, and investors detected a subtle shift in tone from Fed member Randal Quarles, who signaled that he is open to the Fed having a discussion about tapering its QE programme. Earlier in the week, Fed member James Bullard said that the Fed was not yet ready to engage in a taper talk, but said that the Fed might reach that point in three month’s time. 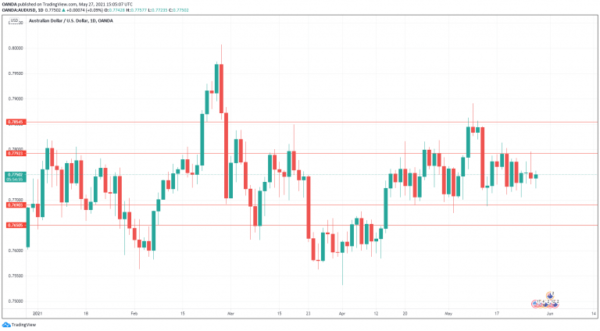