GBP/USD Outlook: Sterling Holds Gains After Hawkish Comments From BoE Policymaker But The Action Remains Within The Extended Range

Cable is consolidating after Thursday’s 0.60% jump on comments from BoE policymaker Vlieghe who said that the central bank could raise interest rates as soon as the first half of 2022 if the labor market recovers faster than expected.

Fresh optimism lifted pound although Vlieghe pointed that the BoE’s action is more likely in the second half of the year, with yesterday’s rally marking the biggest one-day gains since May 10 and pushed the price to the upper side of two-week range.

Near-term action would keep slight bullish bias above rising 10DMA (1.4159), but the range is expected to remain intact as long as key levels at 1.4238 and 1.4100 (range boundaries) limit the action.

Traders await release of US core PCE deflator, Fed’s preferred inflation gauge, due later today, which is forecasted to significantly increase in April and release at/above expectations would lift the dollar and deflate pound. 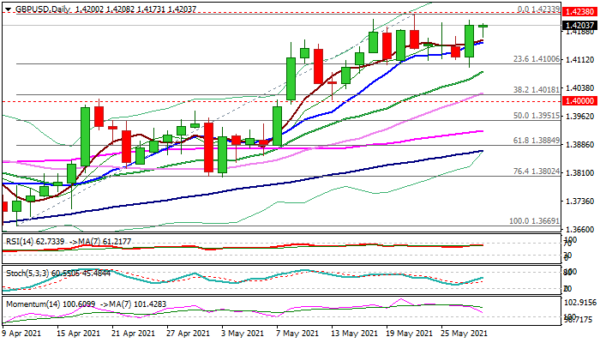