GBPUSD has recoiled to the Ichimoku cloud’s upper surface around 1.4170 after the pair’s latest positive traction, activated near the 1.4100 mark, managed to only yet again peek temporarily above the 1.4200 handle. The bullish simple moving averages (SMAs) are providing essential defences to aid near-term additional price improvements.

Presently, the Ichimoku lines are not transmitting any clear signals in directional momentum but may help fortify support around the 50-period SMA at 1.4162. In terms of the next decisive price preference, the short-term oscillators are not ruling out a retest of the resistance ceiling of 1.4200-1.4236, despite conveying mixed signals in momentum. The MACD is holding not too far above its red trigger and zero lines, while the RSI is dipping in bullish territory. Nonetheless, the stochastic oscillator’s %K line has deflected off the 80 level and is dipping below the %D line, indicating that vital positive impetus remains lacking.

If the formidable 1.4200-1.4236 buffer zone remains heavy, the pair may face initial downside friction from the cloud’s upper band and the adjacent 50-period SMA at 1.4162. Diving down, crucial support could transpire from the cloud’s lower limit at 1.4119 until the trough of 1.4090, an area reinforced by the 100-period SMA at 1.4105. Should an even deeper retracement mature, the sharp drop in the price could then target the vicinity between 1.4008 and 1.3976.

To the upside, buyers would need to muster intense buying interest to navigate above the rigid resistance barrier of 1.4200-1.4236. Recapturing the upper ground past the latter may bolster positive momentum, propelling the pair towards the 1.4314 high, identified in April 2018. To cement a strong bullish bias, the bulls would need to then conquer the resistance section of 1.4345-1.4376, shaped between the rally peaks of January and April 2018.

To summarize, GBPUSD would need to push past 1.4236 to revive bullish hopes, while a dip below 1.4090 could start to strengthen negative sentiment. 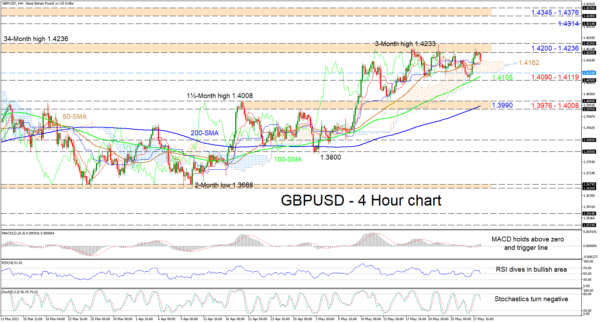