Week Ahead – Could There be Another NFP Shock in Store for the Dollar?

As predictions about higher inflation turn out to be mostly correct, investors haven’t been doing such a good job in reading the health of the US labour market. The May nonfarm payrolls report will be an important test for the markets, although this time round, the risk might be skewed towards a positive shock. But a busy data schedule means traders will have more than the US jobs report to grapple with. Australian and Canadian GDP prints, Eurozone flash CPIs and the ISM PMIs are some of the other highlights. The Reserve Bank of Australia will kick off the June central bank gatherings but is unlikely to follow in the footsteps of its kiwi counterpart in signalling a policy shift.

Steering NFP expectations after going badly off the mark

The miss in April’s headline jobs number was one of the biggest on record, tempering expectations about how soon the Fed will dial back its stimulus. Until that point, the Fed’s argument that the economic recovery in the United States still needs plenty of support in the face of rising inflation was seen as insufficient. However, markets are now convinced the Fed won’t budge until the recovery is more complete and it has a clearer view on the inflation outlook.

The latest nonfarm payrolls report on Friday is unlikely to change that narrative, but after the recent run of unimpressive data, perhaps there is a small risk that some market participants have now become overly pessimistic and the big miss turning into a big beat can’t be ruled out in May.

Analysts are forecasting a gain of 621k jobs in May, which would be a significant acceleration from April’s 266k print. The unemployment rate is expected to have dipped from 6.1% to 5.9%, while average earnings are forecast to have risen 0.2 percentage points over the month. 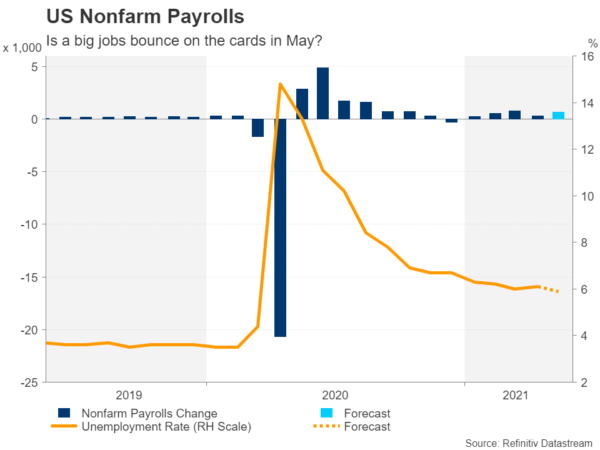 A survey by the Dallas Fed suggests businesses are facing ongoing difficulties in filling vacancies in May so hopes for a big rebound beyond the seasonal factors that affected the April figure are not high. The generous unemployment benefits that were blamed for discouraging people from seeking work in April will run till September so that trend looks set to last for a few more months.

Nevertheless, weekly jobless claims have been falling steadily in May so an upside surprise is still possible. Moreover, considering that Treasury yields are on the way up again, a bigger-than-expected jobs bounce could further fuel the selloff in US bonds, pushing yields and the dollar sharply higher.

Aside from the NFP release, investors will be keeping a close eye on the ISM manufacturing (Tuesday) and non-manufacturing (Thursday) PMIs. Both indices had eased from multi-decade highs in April but continued to point to strong growth. The forecasts for May are for a slight improvement in the two gauges.

The Reserve Bank of New Zealand may have just taken its first step towards normalizing policy but its counterpart in Australia will be sure to stress it is nowhere near exiting from its stimulus programme when it meets on Tuesday. Having initially appeared as a reluctant member of the QE club, the RBA’s balance sheet has shot through the roof since March when the central bank ramped up its asset purchases to contain the inflation fallout in bond markets. 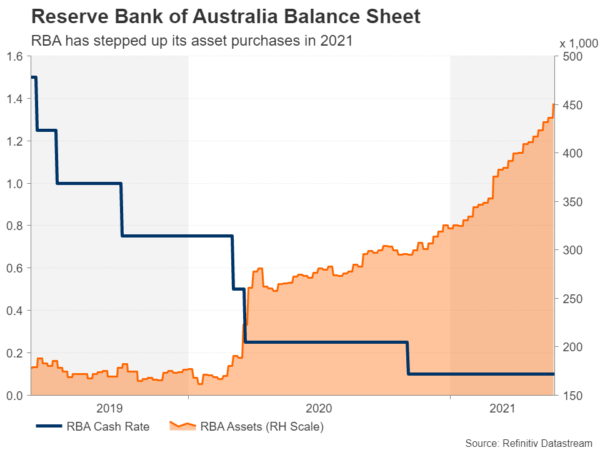 As economies around the world reopen and populations get vaccinated, that upward push in global yields could intensify and the RBA will need to maintain a large presence in the Australian government bond market if it is to prevent another surge in domestic yields. However, with the Australian economy recovering fast, it will be increasingly difficult for the RBA to justify maintaining such an aggressive bond buying programme.

Policymakers have hinted at the July meeting for a decision on whether QE will be extended so it’s almost certain that not much will change in the language before then. They will want to re-emphasize the progress still needed in achieving sustained wage growth of around 3%, which they see as a prerequisite for inflation to return to the 2-3% target band. More recently, the fresh lockdown in the state of Victoria provides the Bank another excuse to stay cautious about the outlook.

The RBA’s clear conditions for a policy shift mean the barrage of data due out of Australia next week is unlikely to sway the aussie substantially. The local dollar has been consolidating against the greenback since February and will probably continue to do so until there’s a major new policy signal by either the Fed or RBA.

The week will start with private sector credit figures on Monday, followed by building approvals and Q1 net exports contribution on Tuesday. First quarter GDP numbers will be watched on Wednesday and retail sales (final) will wrap things up on Friday. In addition to the domestic releases, manufacturing PMIs out of China on Monday and Tuesday will also be important for the aussie.

GDP and jobs data will be key for the loonie

In Canada, the Q1 GDP reading might have better luck in spurring a reaction in the loonie. The Bank of Canada has already started to wind down its pandemic-era stimulus so investors will be keeping an eye on the incoming data for clues on the speed at which this process will be completed. The GDP numbers are due Tuesday and the May employment report is out on Friday.

Regional lockdowns are expected to have dented growth slightly in the first three months of the year, but with Canada’s vaccination pace speeding up in recent weeks, the main attention will be on the recovery of the labour market. A strong rebound in May after the 207k job losses in April might just boost the Canadian dollar past the critical level of C$1.20 to the US dollar. 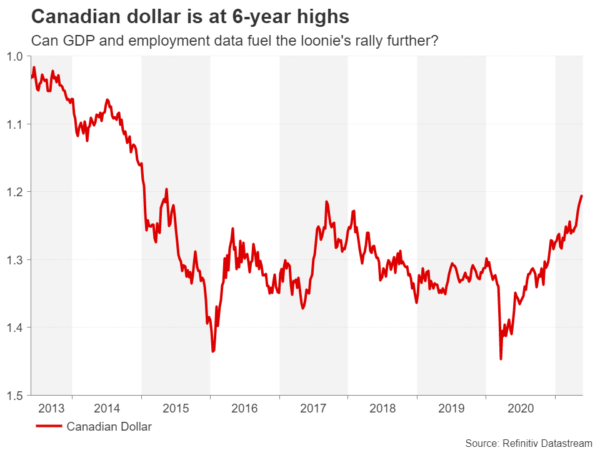 Inflation in the euro area is expected to hit the European Central Bank’s goal of close but below 2% on Tuesday when the flash estimate is released. Headline inflation is expected to rise to 1.9% year-on-year from 1.6% before. However, like other central banks, the ECB is attributing this spike to last year’s low base effect and won’t respond to a temporary overshoot of its inflation target. 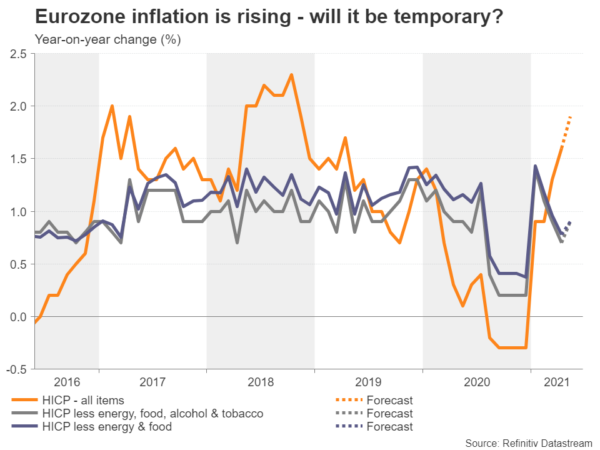 More crucially, ECB officials have lately been downplaying speculation that they will discuss slowing the pace of bond purchases in June, yet, the euro’s positive bias has mostly stayed intact. Signs that the Eurozone’s recovery has started to catch up with America’s is supporting the single currency and as long as that optimism holds, the euro’s downside from a more dovish ECB could be limited.