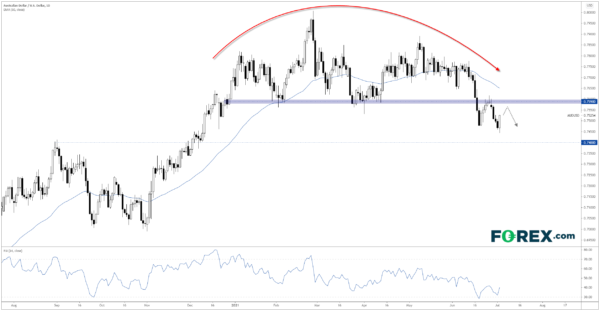 It’s a fairly quiet week for economic data, albeit with a couple of highlights worth watching.

Friday’s US NFP report was the highlight of the last week, but it certainly didn’t make anything clearer for traders…or policymakers. According to BLS estimates, the US economy added 850K jobs in June, the best reading (after revisions) in 10 months! While the headline print was fairly strong, some of the secondary aspects of the report were more mixed, with average hourly earnings rising only 0.3% m/m and the unemployment rate ticking up to 5.9%.

On balance, the report shows that the US labor market continues to heal following the damage from the COVID-driven recession, but policymakers (and the populace more broadly) would like to see the recovery extend for a couple more months before starting to remove stimulus.

Below, we highlight some of the key themes, reports, and charts to watch in the coming (US holiday-shortened) week:

There are two areas of focus for central bank watchers this week: Australia and the US. The RBA meets on Tuesday and may tweak some of its asset purchases and yield-curve control efforts. While the Australian economy has seen a comparatively robust recovery, helped along by continued strong growth in China, 80% of Australia’s population is currently under lockdown amidst fears of a potential COVID outbreak. Vaccination rates in the country have picked up of late, but at just under a quarter of the population vaccinated, the Australian economy continues to reopen in fits and starts, so the RBA is likely to hold interest rates unchanged until next year at the earliest.

Meanwhile in the US, traders will get a much-needed peek behind the proverbial curtain at the FOMC in Wednesday’s release of the FOMC minutes. Recall that the central bank saw a big hawkish shift toward expecting two interest rate hikes by the end of 2023 in that meeting, so the market will closely scrutinize the minutes to see what may have spooked policymakers and try to garner insights into when the central bank will announce its tapering plans.

As we go to press, we’re still waiting on an output decision from OPEC.

The highly-anticipated OPEC+ meeting was delayed a day until Friday after a preliminary agreement was thought to have been blocked at the last minute the day before. According to reports, the United Arab Emirates reportedly objected to a plan for an easing of cuts and their extension to the end of next year. As always, the tension is between wealthy Middle Eastern countries with vast reserves that generally take a longer-term perspective and the poorer periphery members of the group that would rather maximize near-term revenue by exporting more oil immediately.

While short-term rates are signaling the risk that the Fed could hike rates sooner and/or more aggressively than outlined in the most recent Fed meeting, the benchmark 10-year US Treasury bond fell about 10bps last week to settle near 1.44%. In essence, bond traders are signaling that they aren’t concerned that inflation will become entrenched, a view that Fed officials share.

Both traders and policymakers will be closely monitoring economic data moving forward, but if longer-term interest rates continue to fall, there will undoubtedly be a spillover impact across all global markets. For one, falling interest rates may eventually become a headwind for the bullish dollar trend. Likewise, declining yields tend to benefit growth stocks over more value-oriented names and could even boost the price of gold by reducing the opportunity cost of capital.

This will be another slow week for earnings before we get into the meat of Q2 earnings season later in the month. The key releases we’ll be watching include Ocado, Purplbricks, Sainsburys, B&M, Firstgroup, Fuller Smith & Turner, Jet2, and Levi Jeans.

It’s a fairly quiet week for economic data, albeit with a couple of highlights worth watching. For AUD and ASX200 traders, Tuesday’s RBA meeting will be worth watching, though Governor Lowe and company are unlikely to make any immediate changes with Sydney locked down on COVID fears. We’ll also get an more details on what prompted the big hawkish shift from the Fed last month in Wednesday’s FOMC minutes. Finally, the G20 Meeting on Thursday and Friday will garner some headlines, though the immediate market impact may be limited.

Chart of the Week: AUD/USD With the RBA meeting and Australian retail sales on tap, it’s worth checking in on AUD/USD. The currency pair tagged a fresh year-to-date low around 0.7450 Friday before bouncing back above 0.7500 as of writing. More generally, rates spent the entire first half of the year forming a large “rounded top” or “complex head-and-shoulders” pattern; either way, it’s clear that the longer-term trend in AUD/USD has shifted from bullish (higher highs and higher lows) to a downtrend (lower highs and lower lows). Moving forward, the key levels to watch will be previous-support-turned-resistance at 0.7590 and previous-resistance-turned-support at 0.7400, with a general bearish bias toward that support level.

With earnings season and economic data projected to pick up in earnest after this coming week, it’s a great time to review longer-term charts and themes to ensure you don’t get caught up in the day-to-day deluge of information in the coming weeks.

Have a great weekend and best of luck with your trading!